Too Hot in Music City

It's TOO HOT TO FISH here in Music City. A record 109 degrees yesterday, so I did a few more Baitrageous cartoons in front of the big screen today. Check out Bob's new secret fish sauce for a little more heat. Enjoy Y'ALL! 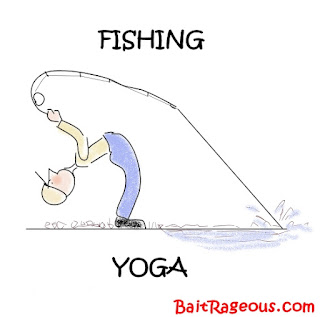 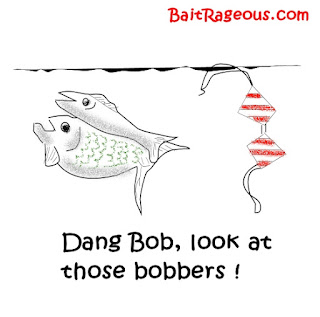 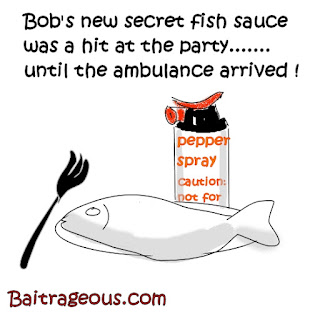 Life's short, get away from the big screen and get on a big stream!

Posted by Baitrageous at 12:12 PM No comments:
Email ThisBlogThis!Share to TwitterShare to FacebookShare to Pinterest

For you fishermen or women, a little bait humor. 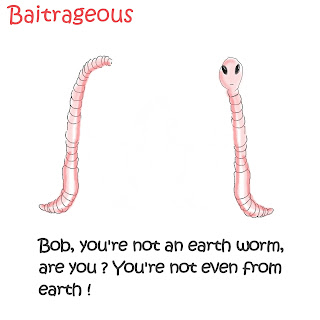 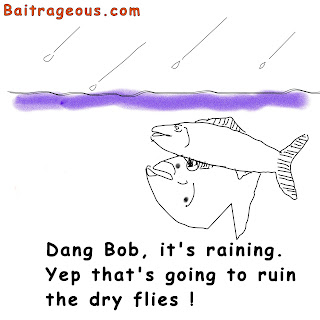 You need to be a fly fishermen to understand this cartoon. 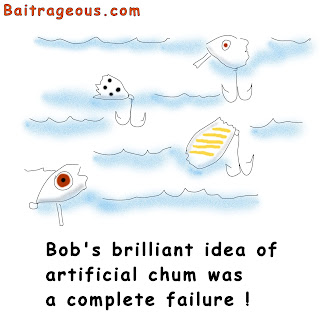 Life is short, get away from the big screen and get on a big stream!

Posted by Baitrageous at 10:59 AM No comments:
Email ThisBlogThis!Share to TwitterShare to FacebookShare to Pinterest

One earring short of a full lobe!

A story about women, fishing and earrings, yep earrings. I did this blog over a year ago and even got a reader approved award from the Outdoor Blogger Network. Read on my friend and see you at the end. 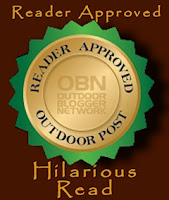 IT ALL STARTED the other day when I could swear my wife was wearing a pair of my spoon fishing lures. At that moment, I had an epiphany or I think that is what it was, but it could have been that chilli-burger yesterday. I digress and hopefully digest, too. This got me to thinking about how much women’s earrings resemble fishing lures. In fact, I think some of my wife’s earrings could be hanging in Bass Pro, if only they had a treble hook. Ah, you don’t think the earring manufactures have infiltrated the lure industry and are now making lures, do you? If this is true, I’m not sure who will be more embarrassed, me who would be fishing with women’s jewelry or her wearing fishing tackle. Wait a minute, I could have saved lots of money because she would wear it for a while and then I could fish with it, cool, dual purpose and environmentally friendly.

I think I just invented a new product, Earring Tackle. Think about what a great Birthday gift this would be for your wife. You just drop by Bass Pro, go to the Earring Tackle, pick out that perfect earring lure, have it wrapped, and present it to her on her birthday. I bet she would say" Holy Crappie" and would love it!!!!!! Later as she grows tired of them, you will end up with a new lure and you might be able to say "Hey Babe, I caught a 3 lb. Crappie with your birthday present." How bout dat?


To make life short, I decided that I had to test this earring tackle concept to determine if fish can actually be caught on jewelry, so I snuck into my wife’s jewelry box to see what I might find. Wow, a jewelry box and a tackle box are nearly the same. Who said men are from mars and women are from Venus. Anyway, I noticed that nice spoon, I spoke about earlier that I have been eyeing. I wondered, will she allow me to add a treble hook? You never know until you ask, right? I realized that trying to talk her out of her spoon earrings would be like trying to talk me out of my rooster tail, no way. Surprise, Surprise, she allowed me to take her spoon jewelry and turn it into "Earring Tackle". Here's a photo of my future tackle that just need a treble hook. Not bad, eh. 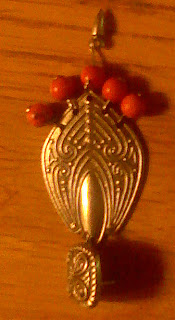 I wondered what kind of fish enjoys women’s earrings. My next step was to fish with it. Fast forward a week and here I am, on the river, sitting in my kayak, with my fishing pole in hand and earring tackle knotted on my line. The first cast was good, nice weight, easy hitting target, runs about 2 inches below water, and shiny, but very little action. That could be an issue. However, it looks like a fish could confuse it for last months, 13 year cicada with those big orange eyes. Cast 2, 3, 4, 5, 6,…..15 and I’m starting to get a little concerned, 34, 35, 36 and bang, I get a bite. I start to reel and notice that the fish seems to be small but a fighter. Could it be a Largemouth, Smallmouth, Rock Bass or Catfish? Here it is my first fish caught on jewelry tackle. 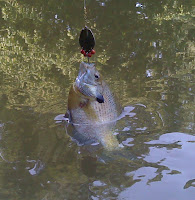 I have answered the question; you can catch fish on your wife’s jewelry. Now I find myself staring at women and thinking, WOW, I wonder what I could catch with those earrings. I have found that you don’t stare too long or the women run off. Did you know that there’s a store called Clarie’s where you can buy 10 earrings for 10 bucks, that's 20 lures for .50 cents each? Dang, this could be big, imagine Claire’s Earring Tackle Fishing Tournament. I can see it now, the winner of the Earring Tackle Fishing Tournament caught the winning fish, a 9 pound largemouth, on a pair of his wife’s danglers. 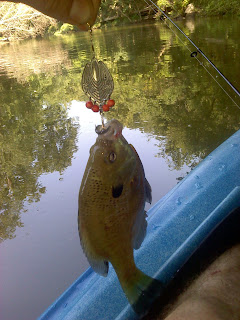 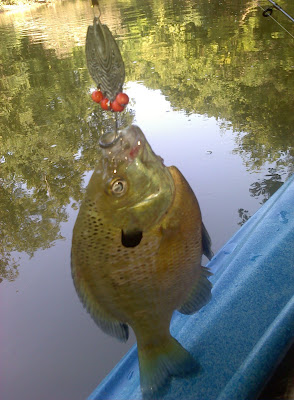 In closing I would like to say-- Hi, my name is Larry and I like women’s jewelry, to fish with. Sometimes it’s good to be one earring short of a full lobe. I hope you enjoyed the humor! Hey, if you are in need of a beautiful vintage style map of your favorite lake, river, or bay, then check-up out my website: LeoMaps.com

Remember: Life's Short, get away from the big screen and get on a big stream!

Posted by Baitrageous at 7:03 AM No comments:
Email ThisBlogThis!Share to TwitterShare to FacebookShare to Pinterest 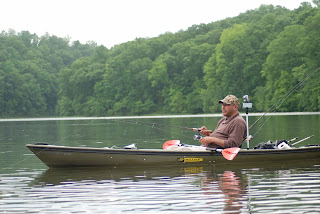 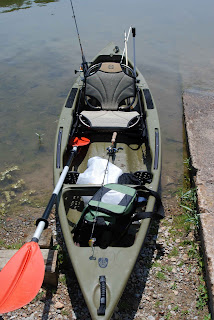 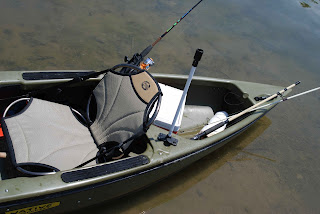 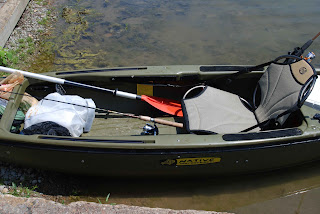 Posted by Baitrageous at 10:47 AM No comments:
Email ThisBlogThis!Share to TwitterShare to FacebookShare to Pinterest

WOW, check out the Tackle Trailer, yep the Tackle Trailer. Finally, you won’t need to make a decision on which fishing tackle to bring, bring it all.  Not only will you have all of your tackle in one spot, you can pull it to your favorite fishing spot.

Just think of what your fishing buddy’s will think when you pull up with the Tackle Trailer! 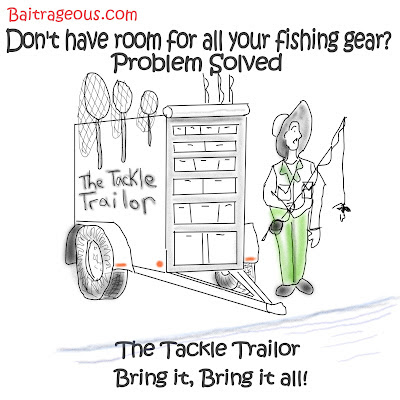 Remember: Get away from the big screen and get on a big stream!

Posted by Baitrageous at 7:14 AM No comments:
Email ThisBlogThis!Share to TwitterShare to FacebookShare to Pinterest

What is a Mess?  A noun meaning a dirty, untidy, disordered condition, person or
thing, or a state of embarrassing confusion. 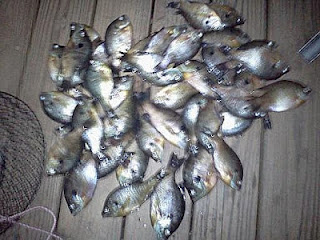 This is a mess in the south, a mess of fish!