What Santa says before he goes out on Christmas Eve! 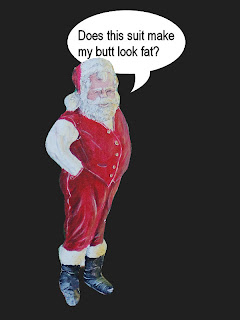 Posted by Baitrageous at 7:32 AM No comments:
Email ThisBlogThis!Share to TwitterShare to FacebookShare to Pinterest

On a fall sunny day, I opened the mailbox and to my surprise it looked like a mini pillow top nest had been made right on top of the mail. There were many leafs, long strips of grass, and fluff. In addition, there were strips of white paper shredded and laying on top. All this looked like a mini pillow top bed all swirled in a circle with an impression in the middle. It was obviously a connoisseur of comfort.

There were two questions that came to mind, what creature lives here and how did it get in our mailbox? I could see the mail was under the nest. It appeared to be vacant, but I was cautious because last year as I was reaching my hand into the mailbox a red wasp flew out and chased me down the road. It is a good thing no cars were coming or I would have been dead. Unlike most folks, if it had stung me on the head I would have blown up like a Halloween pumpkin on a fall day. You see, I am allergenic to bees and will automatically react without thinking. I once even jumped off a 10 foot roof, but that's another story for another time.

I carefully reached in and removed the nest out of the box. I could see that the mail had been munched on around the edges and torn in strips. I went to the mailbox three more times during the week and found a nest, torn mail and no sight of a creature. By now, I really started to wonder what was living here; perhaps it's a band of fairies that like to sleep comfortable on a pillow top nest. I thought, the next time I will bring my camera and take a picture. Part II of the story will be posts in the next few days.

After about three weeks of finding a nest and no creature, on this day I went to the mailbox wondering if this will be the day that I will find out what is living here. I have learned that it prefers the Sears advertisements over all other mail. I'm thinking it's the softer side of Sears that makes the best bedding.

I have my camera in hand and I carefully opened the mailbox. This is different, I find two black sticky pads in the box and a nest built on top of the sticky pads. Hmm, it seems the mailman is interested in what's living in the mailbox too. This does bring up a question: Do all mailmen carry sticky pads with them or only in our area? Also, I was charged $5.39 for mailbox extermination. Have you ever heard of a Mailbox Extermination charge? I haven't, because I'm kidding. They did not charge me, but did provide the sticky pads for free. Now back to the story, I'm not sure how this creature avoided not getting stuck to the pads and was able to build a nest on top, but it is apparent, this is one smart creature. I cleaned out the box and hoped for a lucky tomorrow. 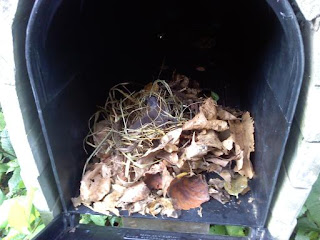 This is a new day and a new trip to the mailbox. I opened the mailbox and to my surprise there is a brown, furry, warm blooded, little creature, all curled up in the nest. It's a field mouse! I did capture this picture of Mrs. Mouse. Shortly after I took the picture, Mrs. Mouse scurried away to the back of the box and out through a small hole. I have now plugged the hole and have no longer seen Mrs. Mouse. With a little improvement and a few changes here and there, I think this could be a good children's story, "Mice in the Mailbox". Catchy, What do you think?
Posted by Baitrageous at 8:08 AM No comments:
Email ThisBlogThis!Share to TwitterShare to FacebookShare to Pinterest 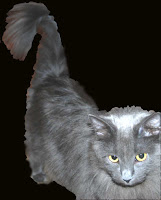 There is Smokey the Bear, Smokey the Hound, and now, Smokey the cat. What is Smokey's name to fame? Well, he always ends in a question, can you tail. Smokey questions everything no matter where he travels. When we found Smokey and his brother they were living in a hole on the side of a road. They appeared to be about 5-6 weeks old and now they live with us. I would say that Smokey and Stormy hit the kitty cat jack pot. I'm not the biggest cat person around but, they have brought a lot of joy into our lives.
Posted by Baitrageous at 10:02 AM No comments:
Email ThisBlogThis!Share to TwitterShare to FacebookShare to Pinterest 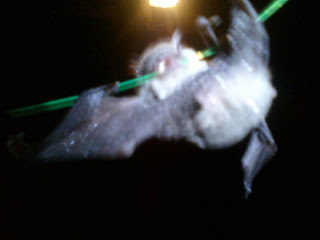 Is it a UFO, a strange fish, or a child's toy, nope?   It measures about 5 ounces with an 8 eight wing span and is warm blooded and furry. Hopefully, you have figured out by now, I am talking about a bat.


You see my nephew was fishing at night on the Duck river in Tennessee and bats were flying around catching inspects. One bat was apparently having trouble with its radar or it was joking with all the other little bats and must have said: "hey y'all watch this". Anyway the bat ends up flying directly into the fishing line that was stretched out over the water. Somehow the bat gets entangled in the fishing line and can't get free. Now that's the way you catch a bat on a fishing pole. Is this a state record for bats or the only bat ever caught on a fishing pole. I'm not sure, but this is a unique story  Lucky for the bat, he was removed from the line and flew off like a bat out of hell. I can just see his little bat buddies laughing and giving him a hard time. Checkout my web site: www.oldfieldstudio.com
Posted by Baitrageous at 8:47 PM No comments:
Email ThisBlogThis!Share to TwitterShare to FacebookShare to Pinterest

Before the pretty white, plastic fence, or the green T- posts so common today, there was the cedar fence post strung with barbwire along road sides around the south. This fence was the choice for most farmers in its day and time. Cedar was selected due to its ability to resist decay, strenght, and availability. Most were cut by hand by the farmers and their family, trimmed from all the branches, cut into lengths and buried into the ground about two feet.

The fence was used to keep some things in, like cows and pigs or in some cases, things out, such as goats away from the garden. Fences were a very important element of the family farm. Without them, the farmer would have had a difficult time suviving. The farmer understood the important of the fence and often rode or walked the line checking its integrity and repairing as needed.

Today, the old cedar posts fence, which were placed in the ground years ago, are quickly disappearing. It is no longer a clear line between properties; it has deteriorated to being barely visible with only rusty barbwire sections and broken or missing posts. Not too far in the future, the cedar post fence will be gone forever, returning to the earth in which it came, just like the family farms it once protected.
Posted by Baitrageous at 7:13 AM No comments:
Email ThisBlogThis!Share to TwitterShare to FacebookShare to Pinterest
Newer Posts Older Posts Home
Subscribe to: Posts (Atom)