I haven't posted much on this blog lately because I've been working hard moving the LeoLakes website to a new hosting site. The new site will have an improved look and better features. It has been a lot of work to move, but I think it will better serve the customers. Stay tuned for the official date when the site is ready. Also, holiday orders (personalized & custom)start picking up by the end of October, so don't wait too late. 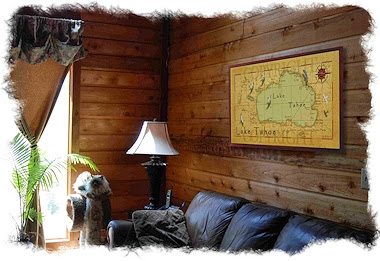 Get away from the big screen and get on a big stream or at least put one on your wall!

Posted by Baitrageous at 6:29 AM No comments:
Email ThisBlogThis!Share to TwitterShare to FacebookShare to Pinterest

Over the Labor Day weekend, I went on a kayak fishing trip to the Duck River. Instead of a long blog report about the activities, sites, fish etc... I decided to try something new, an adventure map! 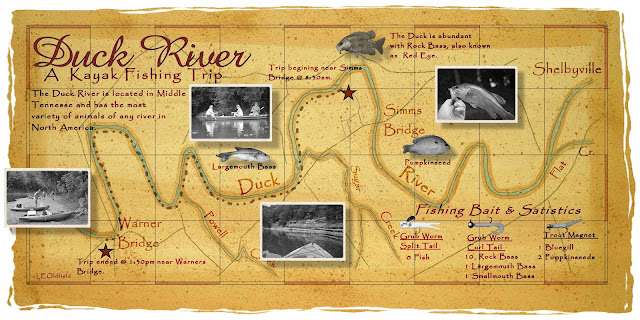 Click on adventure map to enlarge!
If a picture is worth a thousand words, then an adventure map with words and pictures is priceless! I'm not discussing much about the trip, but am using this adventure map to convey the information. Most importantly, I'm experimenting with a new idea. Let me know what you think. To see more of my custom maps go to www.LeoLakes.com

Posted by Baitrageous at 12:09 PM No comments:
Email ThisBlogThis!Share to TwitterShare to FacebookShare to Pinterest

Here's what flashed through my mind this weekend. "I suddenly thought about what would happen if this 20-30 lb. river otter attacked me in my kayak?" It all started last Saturday. I spent the day kayak fishing away from the big screen and on a big stream named the Duck River. Duck River is located in middle Tennessee and is the most biologically diverse river in North American. This river contains more fish varieties per mile than any other river in North America. The Duck is home to over 150 species of fish, 55 mussels, 22 species of snails and many aquatic animals. Anyway, I was lucky to capture a photo of this critter from my kayak. 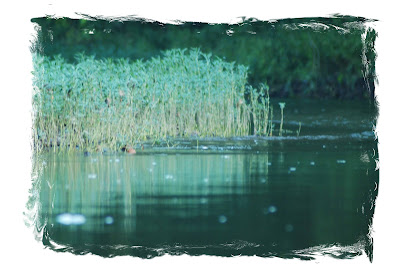 It's a North American River Otter. This is only my second sighting of a river otter, the other was on the Harpeth River, also located in Tennessee. 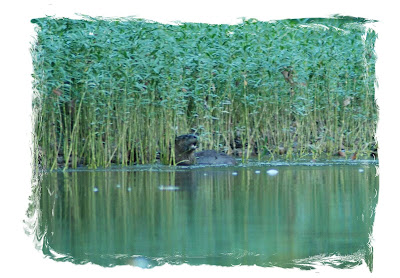 These animals are very agile. In fact, I watched the otter twist and turn like a corkscrew while chasing minnows in and out of the reeds. The minnows were fast, but the otter was faster, often coming up with its catch. 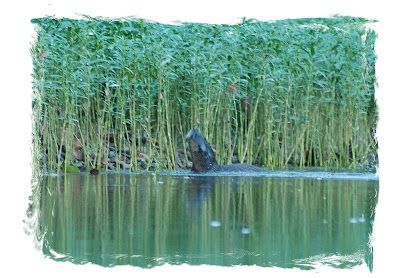 This otter was oblivious to my presence. Here I am, in a big blue kayak, slowly moving toward the otter, while taking photos. He was total focused on fishing. This made me believe that he was a fairly young otter. 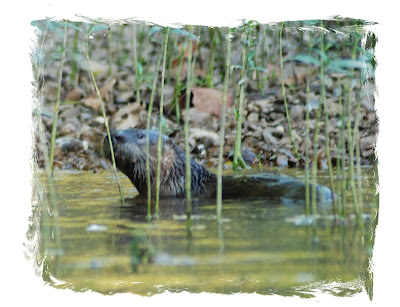 Finally, I moved within 35 feet of the otter and he still didn't detect me. He would come up for air and I would snap a picture. 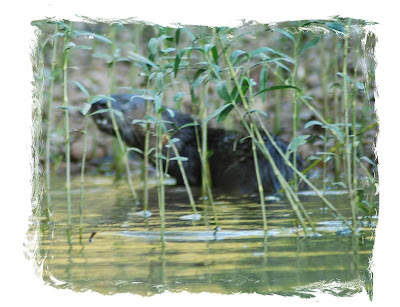 I decided that I was too close and began to slowly move away because I don't like to disturb wildlife too much. I slowly paddled in reverse with one hand while holding the camera with the other, I was hoping that the otter would do something interesting. 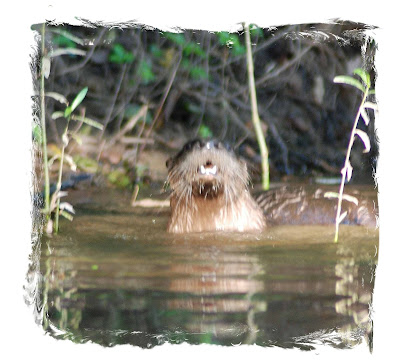 While backing up, the paddle lightly banged against the kayak. Bang, this got the otters attention and he looked up straight in my direction. For a few seconds we both stared at each other and then, he showed me his teeth. You know, it's funny what goes through your mind when a wild animal shows you his teeth. I suddenly thought about what would happen if a 20-30 lb.  river otter attacked, but quickly discounted the idea because I have never heard of otters attacking folks, right? Anyway, check out those teeth; they look like they could do some real damage. Can you believe how white they are? It appears that they've been whiten by the local dentist. Dang, they're bright! Then... 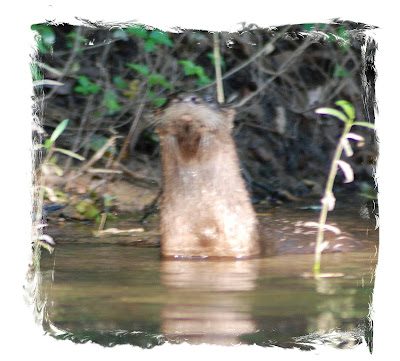 ...the otter raised up aggressively and let out a big snort. I wondered if  this otter was on the edge of attack.  All of a sudden he quickly disappeared under the water heading in my direction. Oh crap, camera down and paddle up. After some time had passed, he apparently had moved on. Boy, did I feel relieved, but otters don't attack people, right? After the trip, I arrived home and the first thing I did was research otter attacks. To my surprise, I found that otters do attack people. Often times when they have small one's around, but sometimes for no known reason. The attacks are vicious; however no one has died from an otter attack. Luckily, it doesn't occur often. Now when I see an otter, I have more respect.