Last weekend, Buttermilk (My fishing buddy) and I, fished at Greenbrier Lake, a small lake near my home. As you can see from these pictures it should be called Water Lily Lake because of all the water lilies. Can't you just see all those big, fat bass laying right under those lilies. 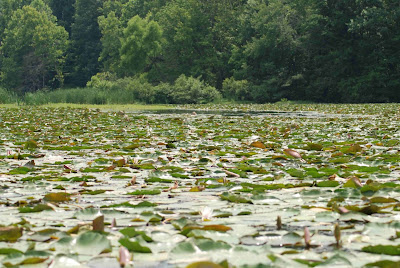 The water lilies were a small problem. There was a bigger problem, Milfoil. Milfoil is an invasive plant that is not native and grows just under the surface. What looks like open water is filled with milfoil. Most of the time, I would reel in a four or five foot long mess of milfoil, pick it off the lure and repeat the process over and over. Oh Yeah, weedless bait was no help. 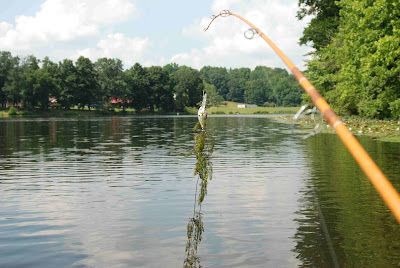 The picture below, gives you an idea of how thick the vegetation was on top of the water. You could almost get out of the kayak and walk across the lake, but this is great bass habitat. Right! 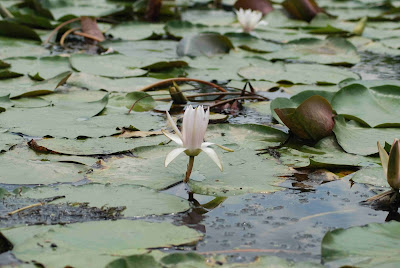 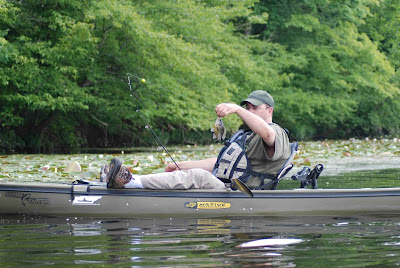 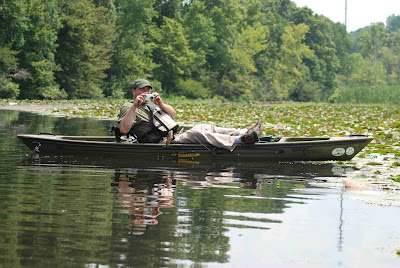 Except for the Water Lilies and Milfoil! 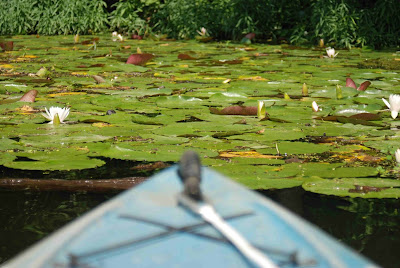 This coming weekend, I will be in the Great Smokey Mountains fly fishing. Wish me luck! Always Remember: Get away from the big screen and get on a big stream!

Posted by Baitrageous at 7:21 PM 2 comments:
Email ThisBlogThis!Share to TwitterShare to FacebookShare to Pinterest

I've been cartooning again and it's something I enjoy. I think I have over 150 now. Some of them I spend time and draw well, others I just quickly sketch out. I warn you that they are kind of nutty and borderline crazy, but it's humor, I think? Oh Yeah, I do have another blog called BaitRageous. 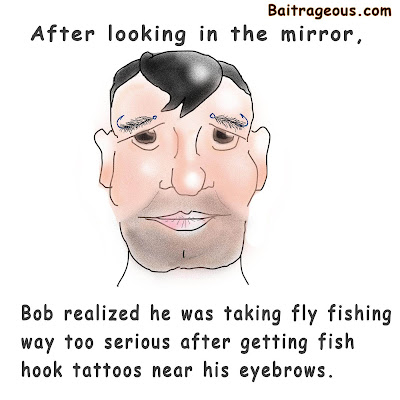 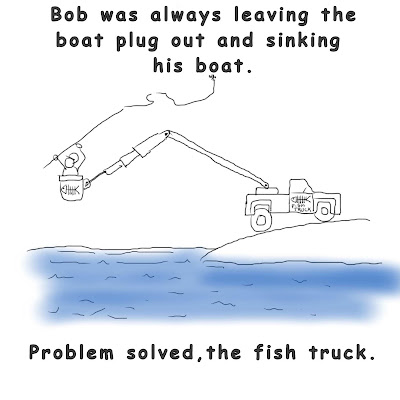 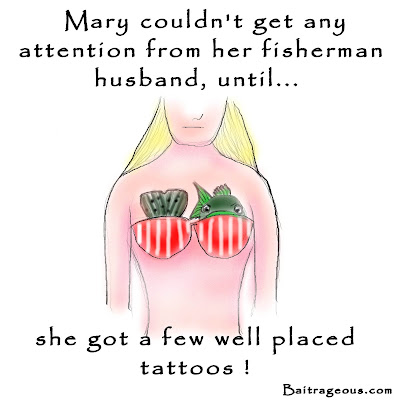 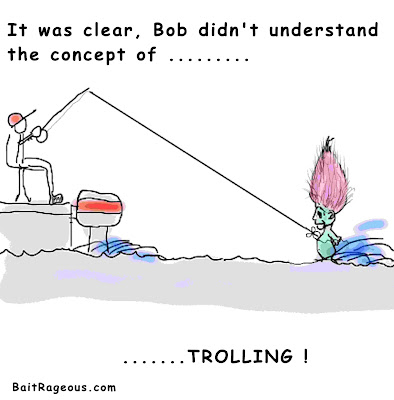 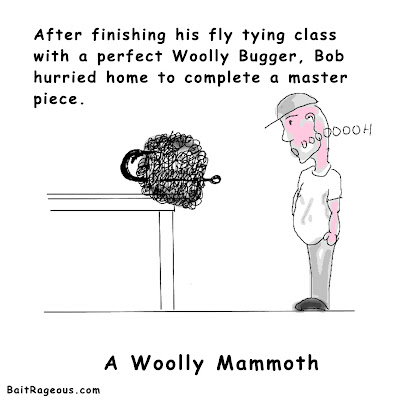 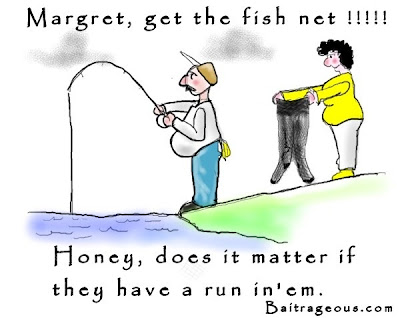 I hope they were funny, and remember
"Get away from the big screen and get on a big stream!"

Posted by Baitrageous at 8:31 AM No comments:
Email ThisBlogThis!Share to TwitterShare to FacebookShare to Pinterest

A few weeks ago, we took our daughter to Governor's school, a summer program for talented high school students. On our way to UT Martin we passed Kentucky Lake. I was lucky enough to briefly get off the beaten path and take a few pictures of the su rrounding area. Unfortunately, I didn't have time to fish. 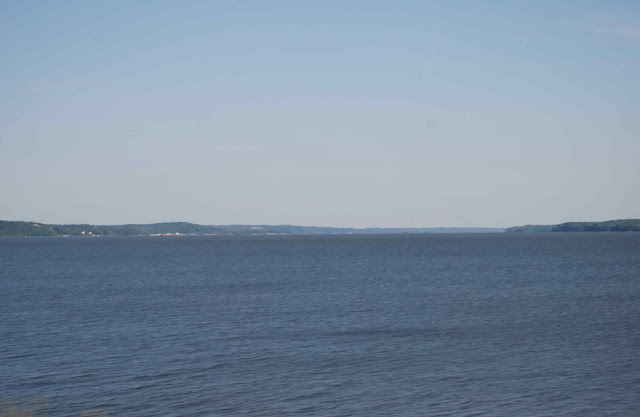 This is a picture looking south off highway 79. As you can see, Kentucky Lake is a very large lake. In fact, I wondered what is the distance that you lookout over water and see no land due to the curvature of the earth, so I looked it up. At a height of 6 feet, with no land on the horizon and only water, it is 3 miles (Note: the higher you are above the water, the further you can see). What's the reason for this useless fact? If you cross the Kentucky Dam and carefully lookout over the water, there's an area that you can only see water and sky like at the ocean. Now that's a big lake. 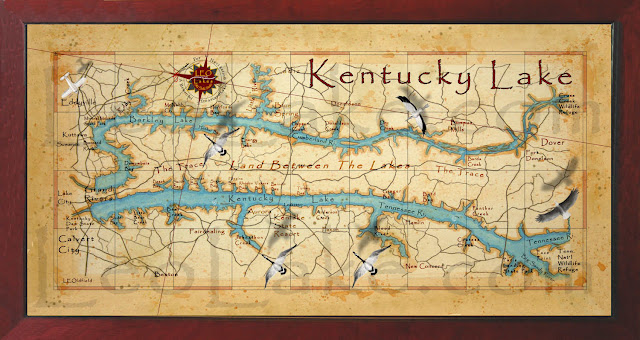 Here's a map of Kentucky Lake that I have painted (see more at www.LeoLakes.com). If you look you closely, you may find a tourist town named Grand Rivers, which is between Lake Barkley on the Cumberland River and Kentucky Lake on the Tennessee River. 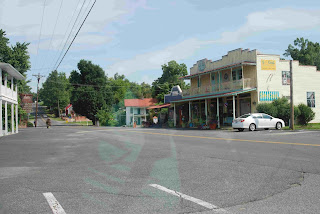 Grand Rivers is becoming a destination. It's sort of a mini vacation rivertown with little tourist shops, restaurants and even entertainment. 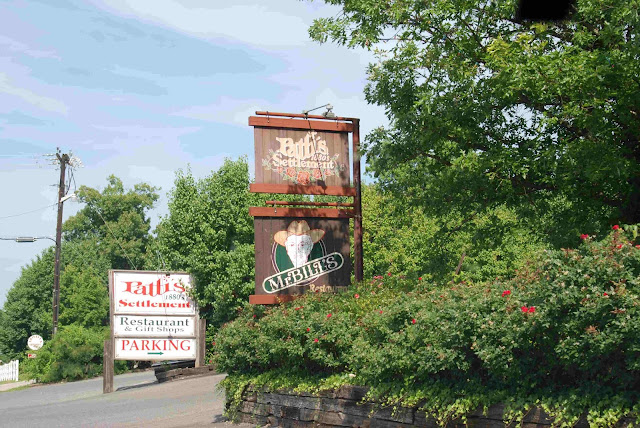 A great place to eat in Grand Rivers is Patti's an 1880's themed restaurant. It started in 1977 and has grown into the top tourist restaurant destination in Kentucky. Try thier specialty, pork chops, I have and they're great. 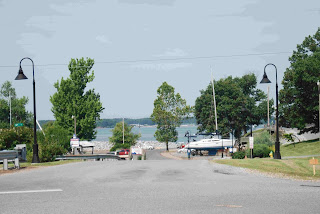 Patti's is a unique and interesting place with not only a restaurant, but many shops to discover. Check it out at: http://www.pattis-settlement.com/index.htm Also, near Grand Rivers is Green Turtle Bay Marina and Resort located on the waters of Lake Barkley. This is a great place to launch a boat or have a meal and explore.

Remember: Life is short, Get away from the big screen and get on a big stream!

Posted by Baitrageous at 8:32 PM 2 comments:
Email ThisBlogThis!Share to TwitterShare to FacebookShare to Pinterest

I have a salt block near our house so I can take pictures of visiting wildlife. A few weeks ago, I captured a photo of a buck with the begining of a nice rack. Here's a picture from about 4 weeks ago. 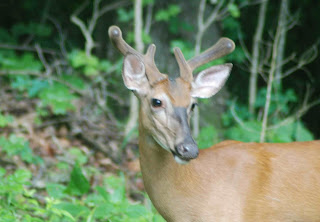 The other morning the same buck came back to the salt block and I was ready. 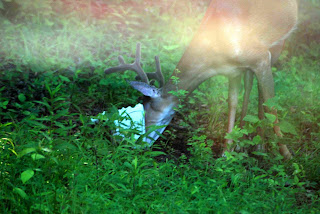 My how his rack has grown. It looks like he's up to seven points. Mr. Buck didn't seem too worried and cautious. 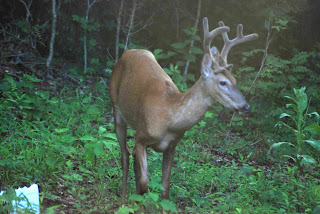 Dang, a quick glance and you would think it's a Reindeer. 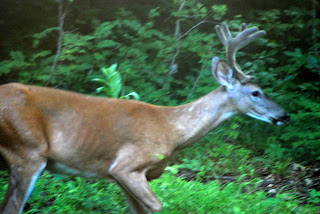 Oh yeah, Mr. Buck has a girl firend or two following him around! I wonder why? 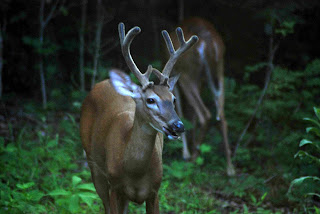 Hopefully, Mr. Buck will be back and I can take a few more photos. Remember: What's in your woods, river, lake, or, bay!
Posted by Baitrageous at 8:59 AM No comments:
Email ThisBlogThis!Share to TwitterShare to FacebookShare to Pinterest

The other day, I was walking on a beautiful Greenway Trail near Nashville. The trail was along side of the Cumberland River, Cheatham Lake. As I walked down the trail on a cool morning for July, I noticed a snake stretched out across the trail as my seventeen year old daughter was just passing beside the snake. I yelled Snake! Lucky for her, the snake didn't move. You know what? Teenagers are just not very aware sometimes.

Anyway, as I neared the snake, I could identify it as a poisonous snake, a Copperhead. The Copperhead was not moving and appeared to be a sleep. Checkout the snakes cool pattern. 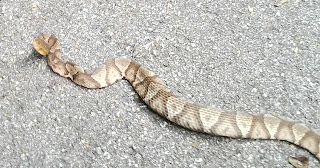 The trail was busy with occasional folks walking and I was worried that someone might not see the snake and get bitten. 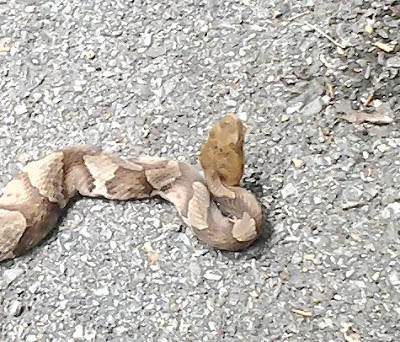 I took a stick and encouraged the Copperhead to move on into the woods. He was stubborn and did strikeout a few times, but after further encouragement, he decided to slither on into the forest. We moved on and you cannot guess what happen next. 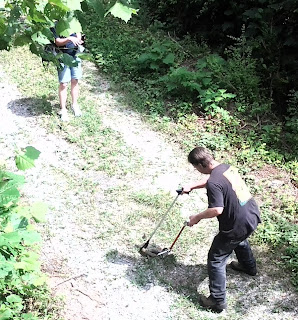 We came upon a snake hunter that had discovered two Cottonmouths. He said one was a female and the other was a male (females are smaller). I questioned him about catching snakes and he said he loved snakes and liked to take pictures of them and then release them back into nature. The snake hunter told me that this area was loaded with snakes. 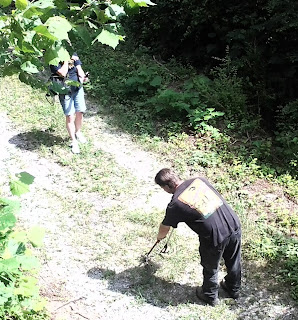 The male snake was much more aggressive than the female, so the snake hunter tossed the male back into the woods. 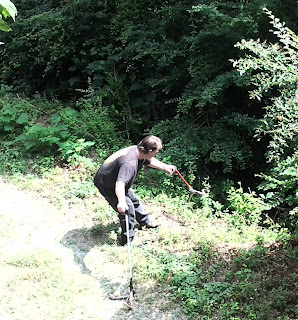 Actually this day turned out to be a very exciting day. We saw three wild, poisonous snakes in one day. Remember: What's in your woods, river, lake, or bay. Get out and find out, but be careful!