A Great Lake House Christmas gift! A beautiful canvas map of the lake that the lake house is located on, of course. This makes the perfect gift for the  lake house owner, or lake lover. A great Christmas gift, check-out these comments  from our customers. Oh yeah, don't forget to look for the hidden mermaid in the waters of your favorite waters!

The map arrived right on time and it was a sensational hit.  Thanks so much, this was exactly what I was looking for and was even better than anticipated. Nate
I just received the map, it looks beautiful! Thank you for helping me put together such a spectacular gift and I will definitely keep you in mind for future gift ideas. Have a wonderful Sunday!

It arrived safely and looks great. Thank you so much for everything! Thanks again!

Arrived safe and sound this afternoon and looks great!  I can't wait to give it to my parents for xmas for their new lake house.  Thank you! 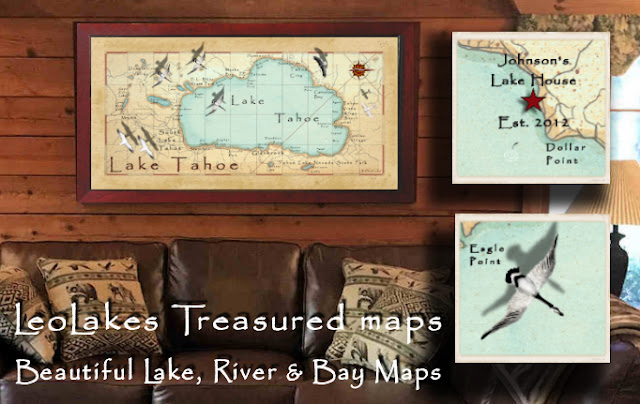 Posted by Baitrageous at 7:05 AM No comments:
Email ThisBlogThis!Share to TwitterShare to FacebookShare to Pinterest

I just complete a new map of Cook Inlet located in Alaska and if you look closely you may find a hidden mermaid in the waters of Cook Inlet below. What's the most interesting feature about Cook Inlet, I will tell you, but first a little about the inlet? The inlet stretches for about 180 miles with Anchorage located near the north end. 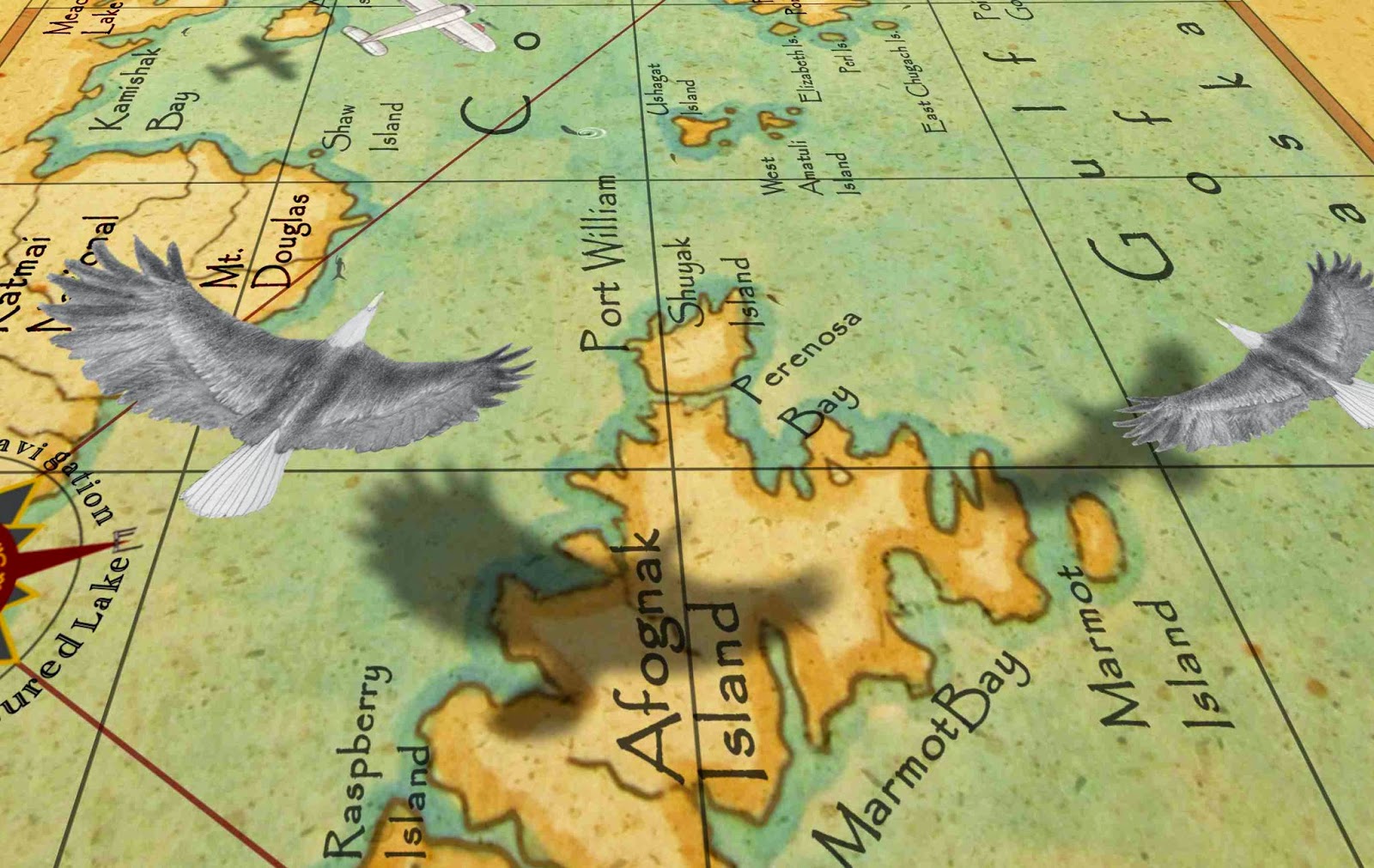 There are two active volcanoes located near Cook Inlet, Augustine and Mount Redoubt. There is an abundance of  oil and gas deposits around the Cook Inlet basin and many platforms dot the land and seascape. 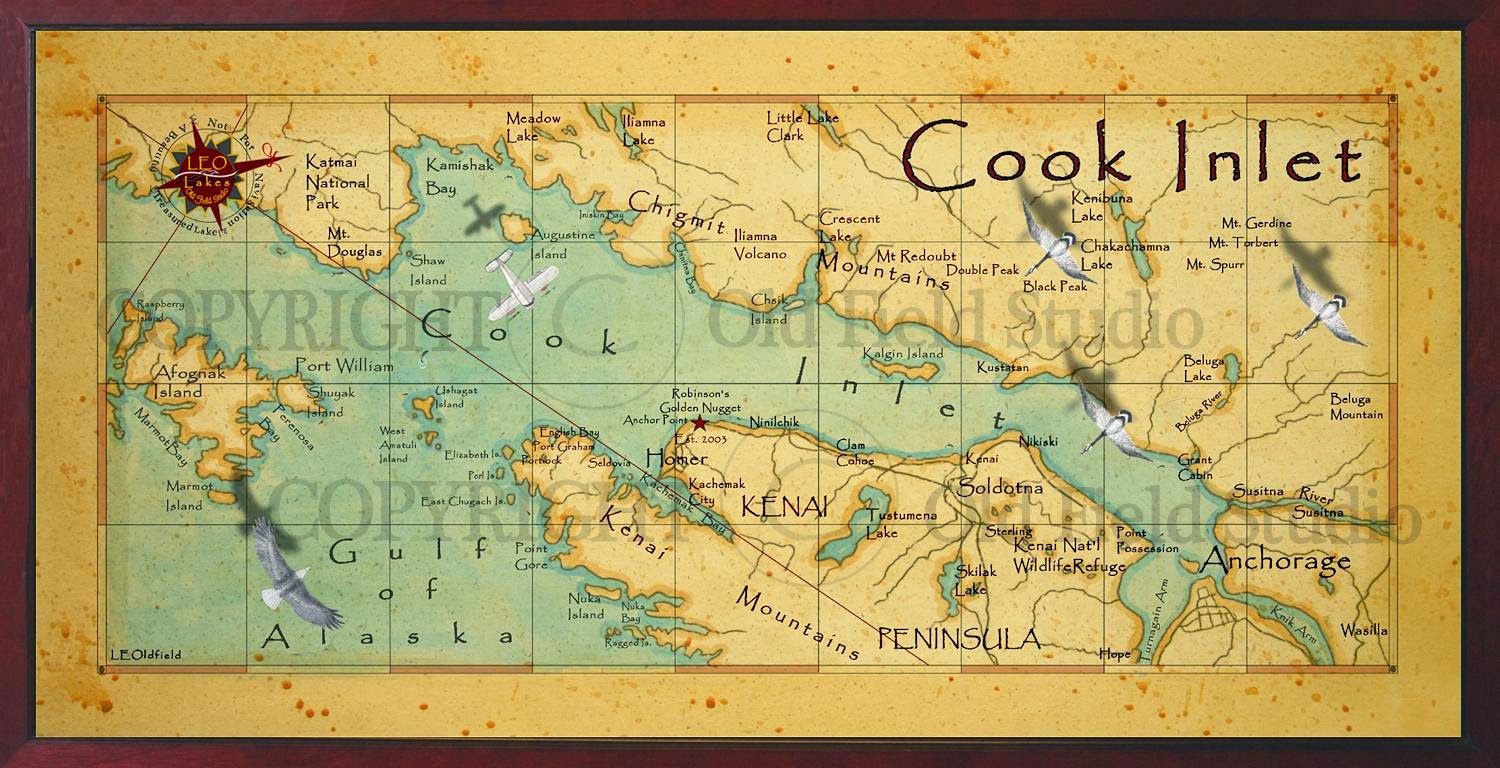 Interestingly, Beluga whales can be seen in the inlet. Its been determined that these are an isolated stock that are genetically distinct and are on the endangered species list. As you can see, there's a lot of interesting features on Cook Inlet, but to me, the most interesting is Tidal bores. What are Tidal Bores, bugs, holes, caves? Nope, but it only happens in a few places on earth, one of these being Turnagain Arm near Anchorage. 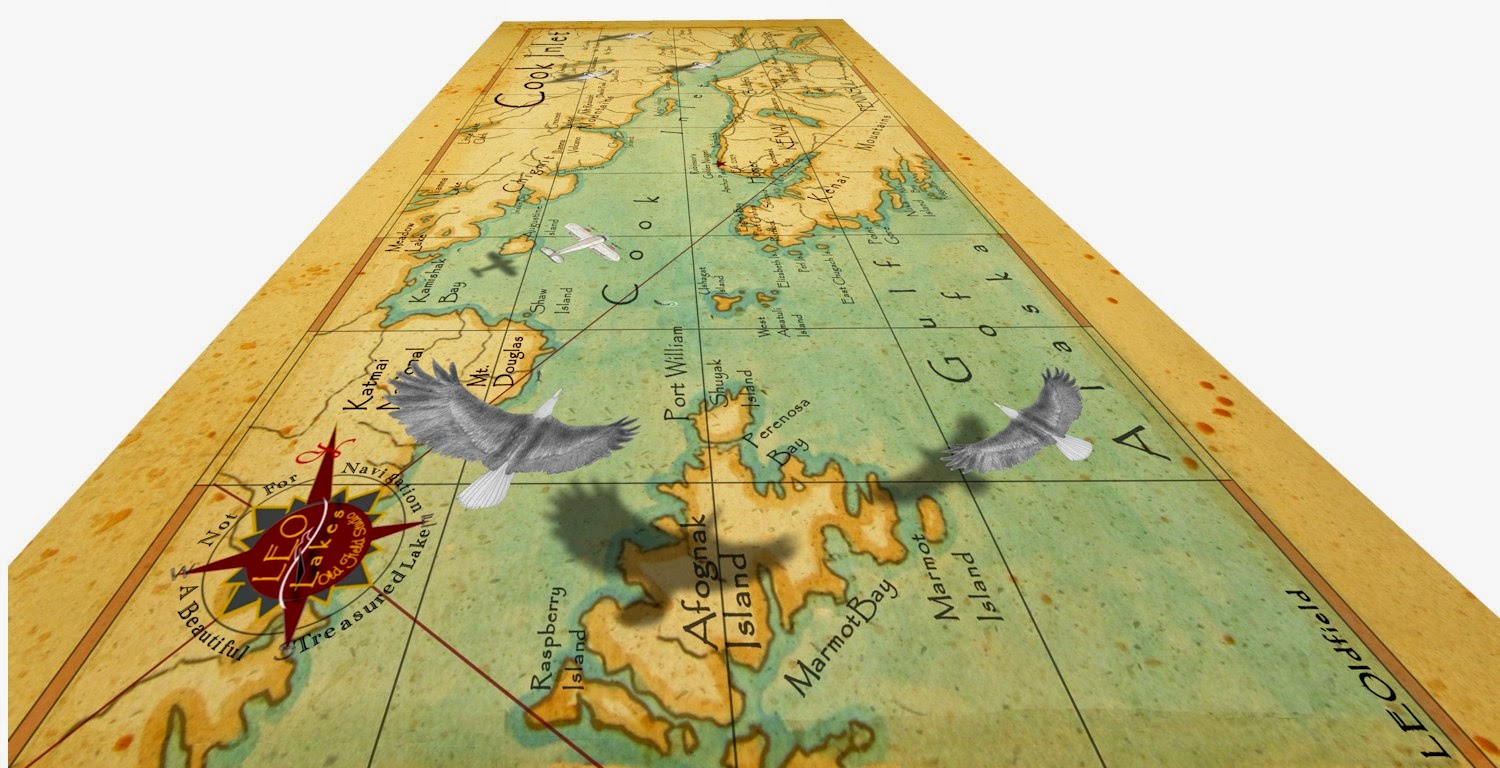 A Tidal Bore is a large wave, up to 10 feet,  or many waves that move down the Turnagain Arm. Unlike most tides, Tidal Bores happen quickly. The largest bores occur after the lowest tides, due to the large amount of water rushing back into the inlet. There are scheduled times each day to see the bore. 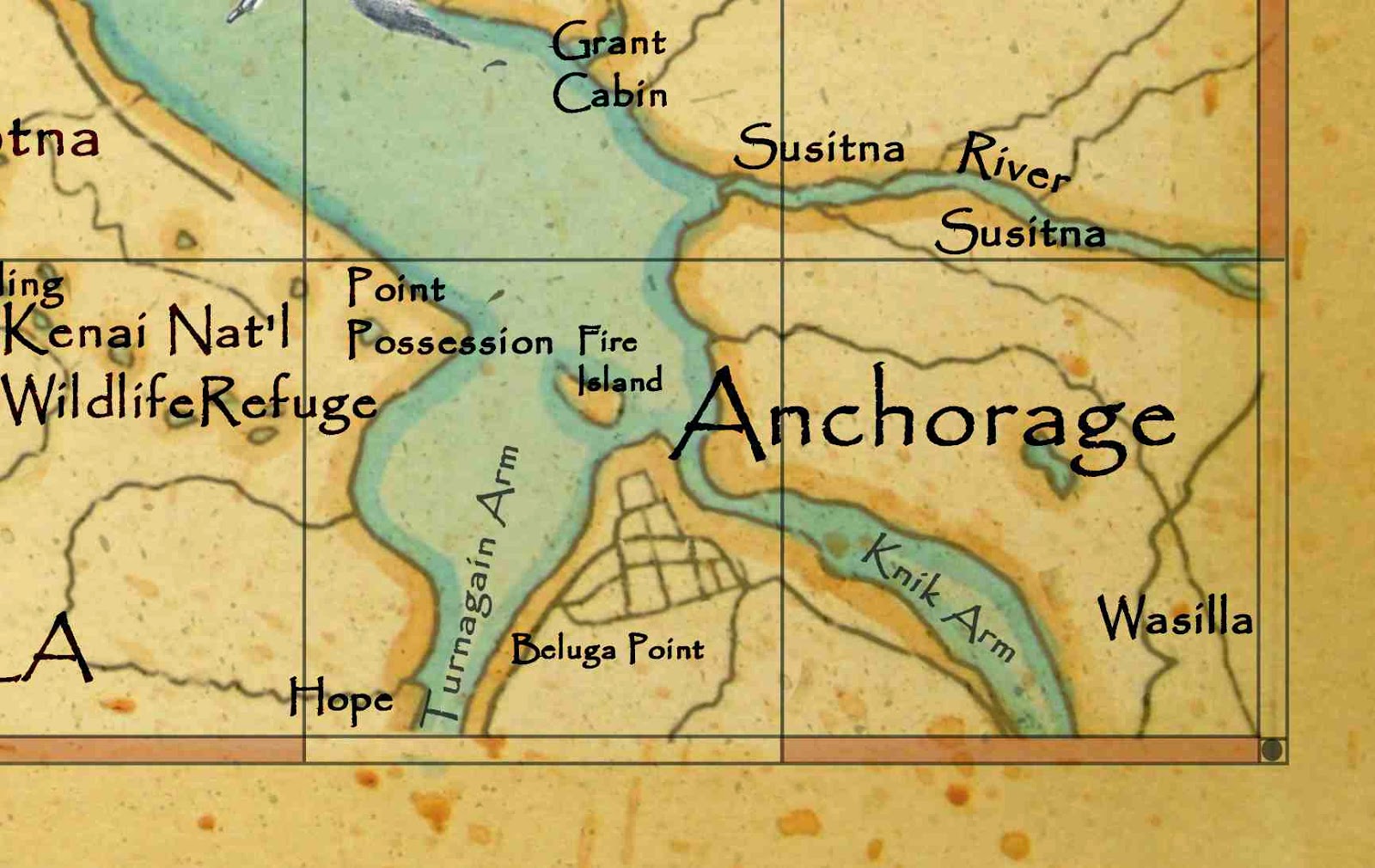 Folks actually surf on the incoming bore, but I bet it's a bit chilly. The best place to see a Tidal Bore is Beluga Point. If you are ever visiting Cook Inlet, check out the Tidal Bore.


See more of my treasured map www.LeoLakes.com. Read what my customers are saying. "I was finally able to give my husband the map I bought for his birthday last night. I want you to know how beautiful it was and how touched he was by it. He loves this Lake. His family has a home there and when we are lucky we get away for a few days, it’s the only place we want to be. He actually had tears in his eyes. Thank you for the beautiful art work."

Remember: Life is short, get away from the big screen and get on a big stream, or at least enjoy one on the wall.

Posted by Baitrageous at 9:12 AM No comments:
Email ThisBlogThis!Share to TwitterShare to FacebookShare to Pinterest

A salute to my dad, Corporal Oscar Oldfield who was in the Army Air Force during World War Two and was a member of the 846th Bomb Sq. 989th GP. He spent three years, one month and 18 days serving this country during a very perilous time. He was station at several different locations including, Eglin Field FL, Flagstaff AR, and Anchorage AK. 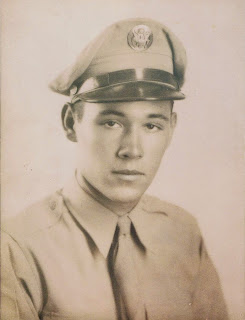 He was an avid fishing and during his time at Eglin Field FL, he and his buddies would fish in swamps in and around Choctawhatchee Bay. A few times they had to fight the gators for their catch.

Posted by Baitrageous at 10:33 AM No comments:
Email ThisBlogThis!Share to TwitterShare to FacebookShare to Pinterest

Folks take great pleasures spending time on there favorite lake. There's so many things to do, from a relaxing boat ride, to sitting dockside and enjoying friends, or more seriously, meeting your future mate and marrying on that beloved lake. That's what happen with a young couple on Lake Winnipesaukee. 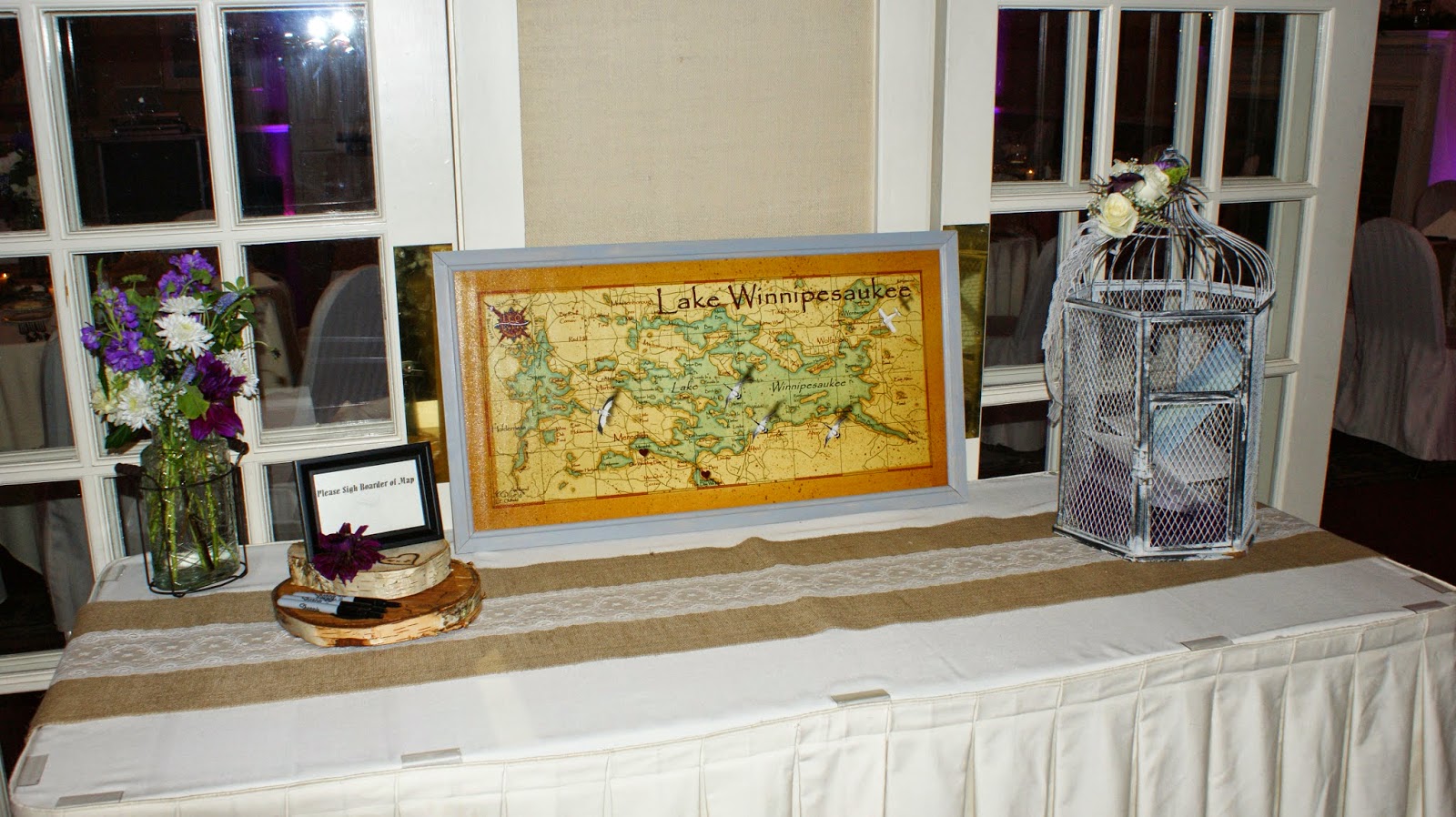 The making of a family heirloom! I was lucky to be contacted about providing a unique wedding gift for a couple. I was asked to add two hearts to my Lake Winnipesaukee decor map. The first heart was placed to the location that they first met and labeled, "The Day We Met" with the date. A second heart was added to the location that they were wed, labeled "Our Wedding Date." with the date. 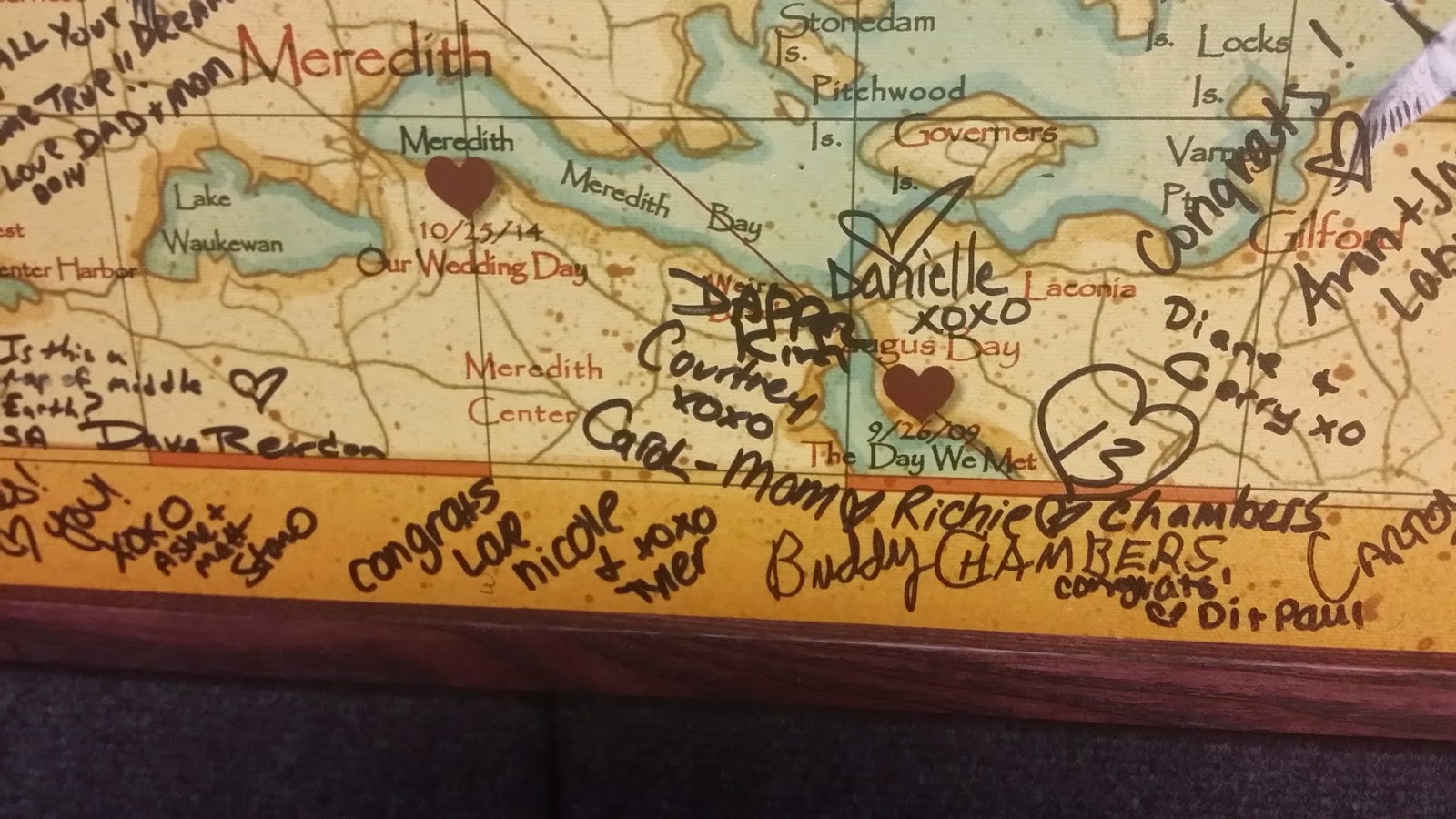 At the wedding, the map was displayed where family and friends could actually sign and make comments on the map with a sharpie. I think it will be great in the years to comes for their children to gaze into the map and read comments from their parents wedding day. 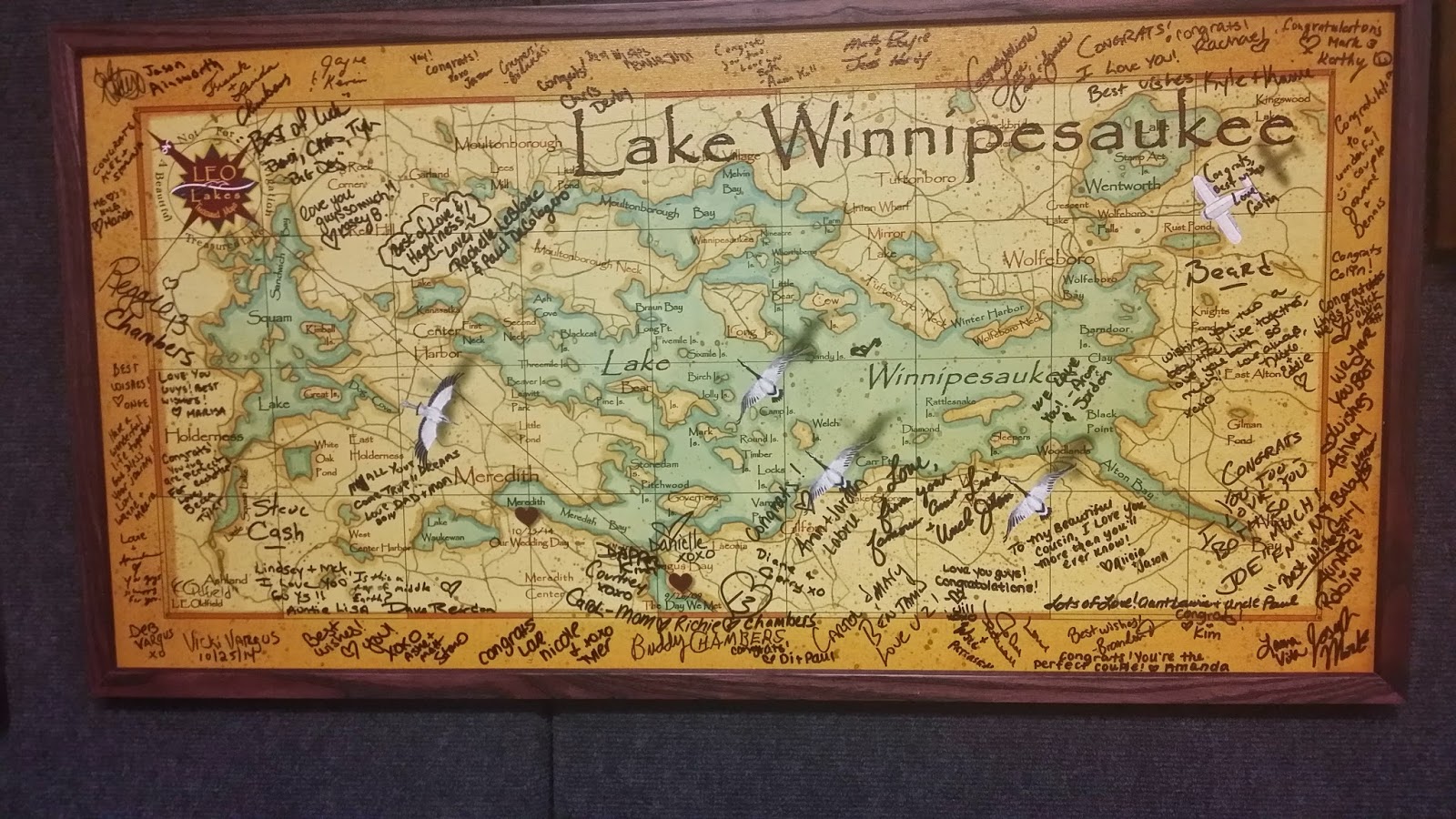 Now that's a true family heirloom. I hope the couple purchases a home near Lake Winnipesaukee and the map becomes a treasured map. On occasion, I do get involved in new and creative ideas for my maps. Believe it or not this is not the first wedding map that I have completed. I normally do a few a year and have even finished one that was 3.5ftx7ft. On this large wedding map, I actually hand painted interlocking wedding rings. 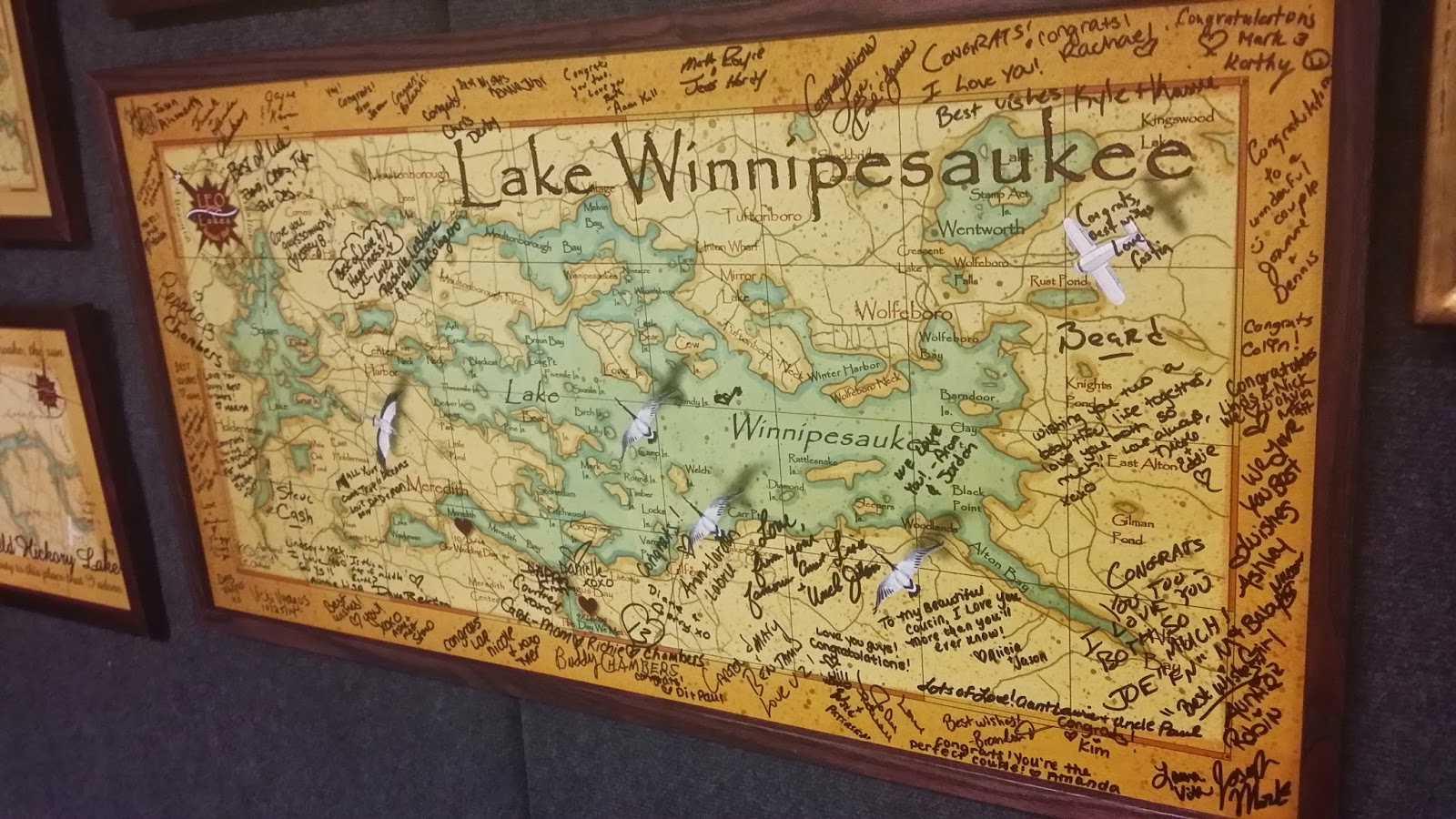 It's true that lakes have become a popular location for wedding because of the love for the lake. In fact, my wife dreamed up this great poem that pretty much sums it up.

"I love this lake, the most amazing thing appear in its wake, the sun arises above the shore, giving grace and beauty to this place that I adore". 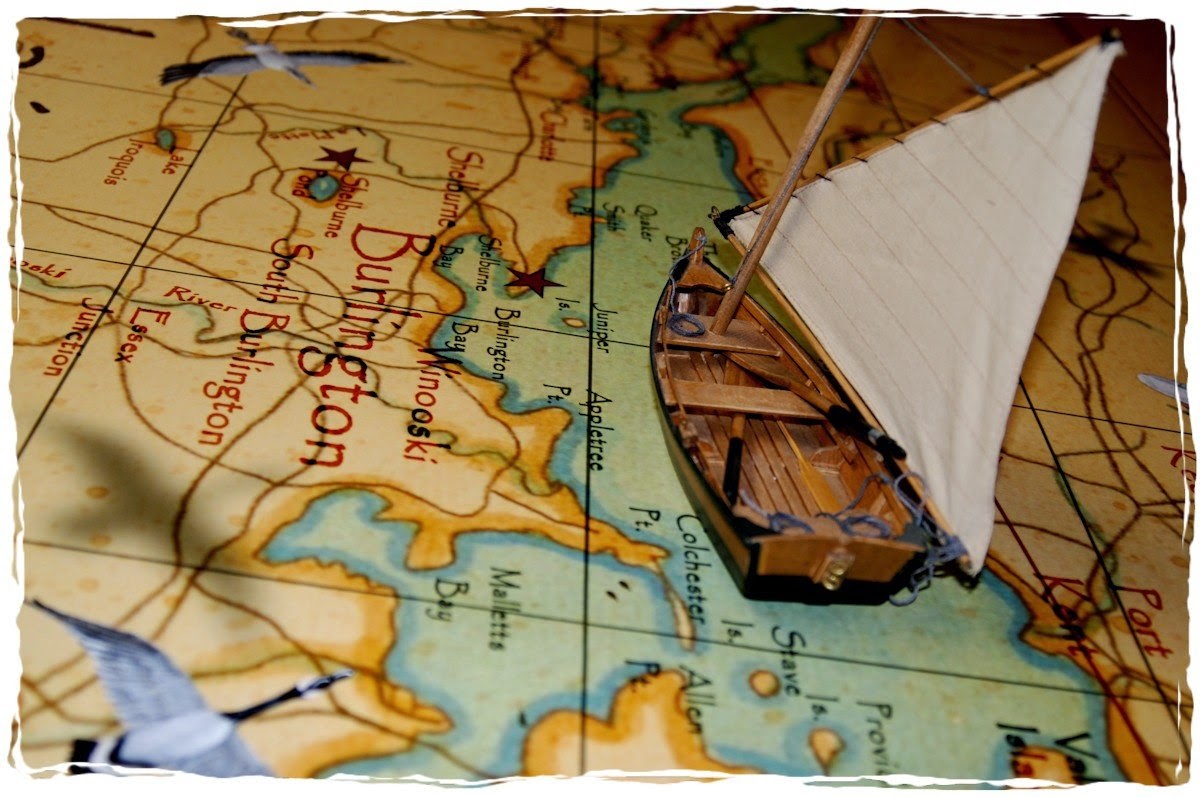 LeoLakes.com
Posted by Baitrageous at 8:51 AM No comments:
Email ThisBlogThis!Share to TwitterShare to FacebookShare to Pinterest
Newer Posts Older Posts Home
Subscribe to: Posts (Atom)