It's great to have neighbors like these! I've been watching the salt block lately to see who comes to visit since my last deer photo shoot. Check out this eight point buck with the wide rack. The weather this summer in Tennessee has been rain about every three to four days. The foliage has remained lush and green. I think that this has created the perfect conditions for deer. This year is a trophy year for deer around here, I have never seen so many large rack deer! 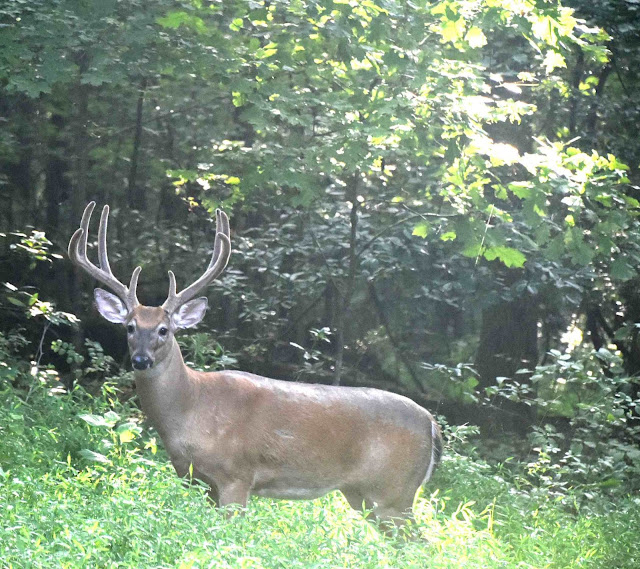 He was traveling with this beautiful ten point buck. If you look closely, you can see that the fur fuzz still on his rack. I'm not sure how much more his rack will grow, but it's already a fine example. 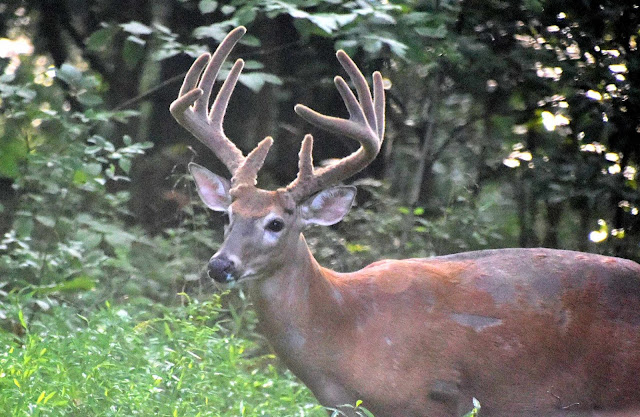 Here's a photo of both bucks looking at me. Lucky for me, they are not too skittish at this time of year. These two allowed me to snap picture after picture. I would say that in a few weeks, I won't be able to get within a 100 yards of them.

Notice that this ten point buck is sticking out his tongue. I'm sure he's thinking "boy this salt makes me thirsty. I bet that they head down to the Sycamore Creek after getting their fill of salt. 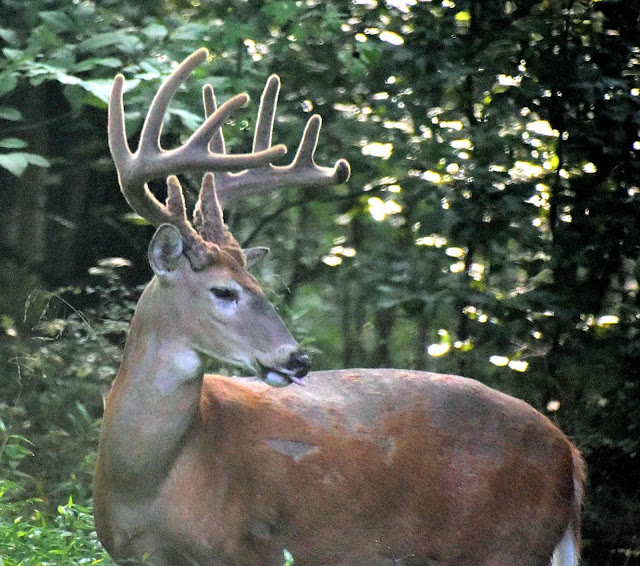 This deer looks pretty ruff, see his back with the marks. Well, he is losing his summer coat, which will change to a darker, thicker winter coat. Molting usually starts at the end of summer and is fairly rapid. 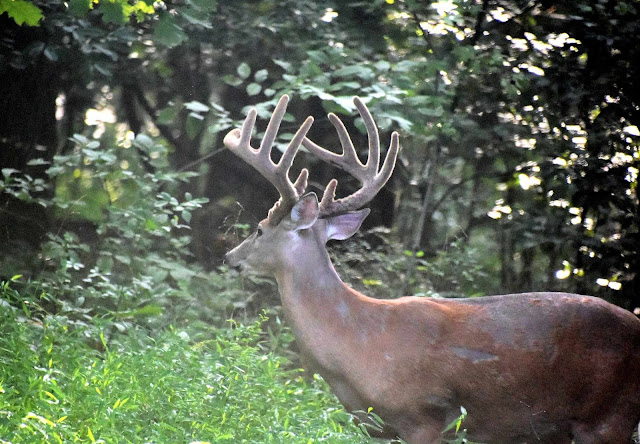 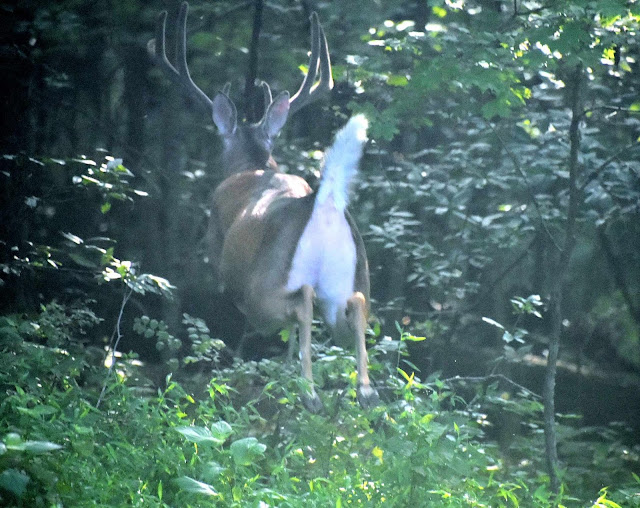 I hope these "big boys" come back to the salt block so that I can document the growth of their rack. While I'm not photographing deer in my ten acre woods, I'm in my studio painting lake, river and bay maps.  As you can see, my maps make great gifts for the lake house owner, lake lover, or fisherman. I have over two hundred on my website that can be purchased right from the site, or I can do custom and personalizes lake, river or bay maps, too. I have decor maps of Old Hickory, Table Rock Lake, Lake Wallenpaupack, Lake Lanier, Toledo Bend, Kentucky Lake, and many others. Oh yeah, I hide a tiny mermaid in the waters of all my maps that folks love to search for. Find out more interesting facts about my treasured maps by going to LeoMaps.com. 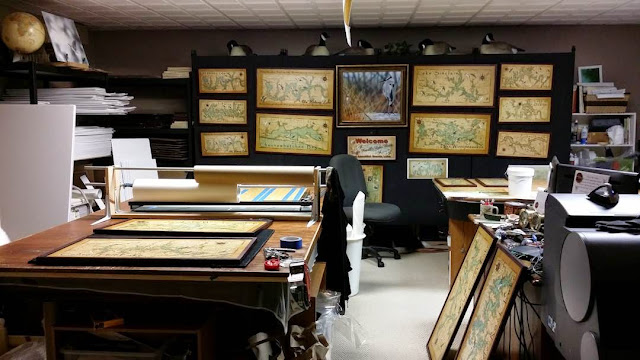 Oh yeah, this is part of my studio! I think I have become a map elf!

Posted by Baitrageous at 12:23 PM No comments:
Email ThisBlogThis!Share to TwitterShare to FacebookShare to Pinterest

I looked out of the window

Two days ago, I looked out of the window and this ten point buck was standing on the edge of our woods. I quickly took out my cell phone and clicked a photo. The photo is not very good because I was shooting through the window, but you can still see his large rack, which has that velvet cover, indicating that it's not completely matured yet. I ran to get my good camera, but found that it was missing the SD card. Unfortunately, I had to search for a SD card and I finally found one a few minutes later. It wasn't surprising, but when I was back with my 810 Nikon camera, the deer had moved on, but in the edge of the woods, I could see something moving.... 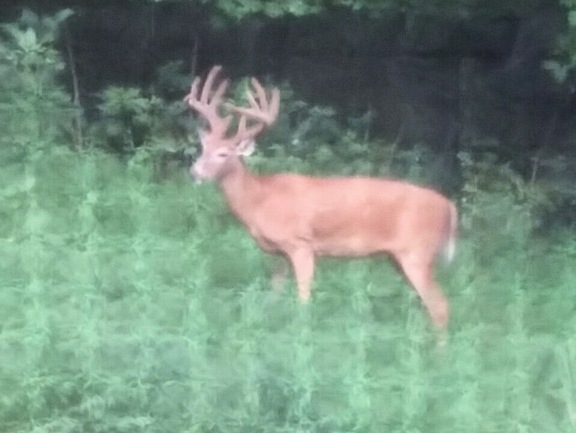 With my better camera, I carefully left the house, down a path and behind a tree without being noticed. 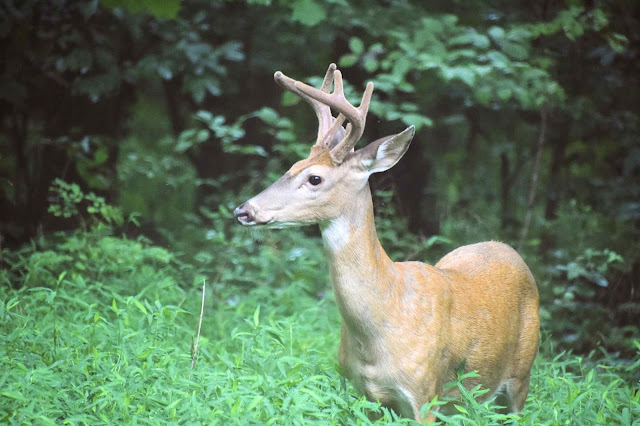 Peeping through the foliage, I could see another deer. After a few minutes, this deer stepped out into the open. It was a slightly smaller deer with a smaller seven point rack, not nearly as impressive as the last buck, but good for a photo shoot.

He looked directly at me, however I have learned that if you don't move a muscle, they can't see you. 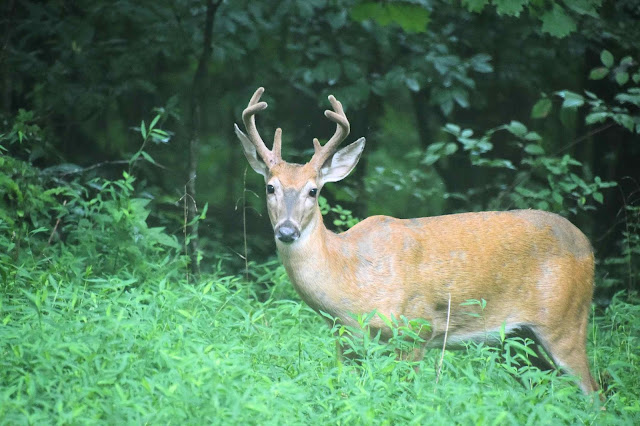 This buck must have thought that he was the object of a photo shoot for GQ Magazine because he gave me some great poses. 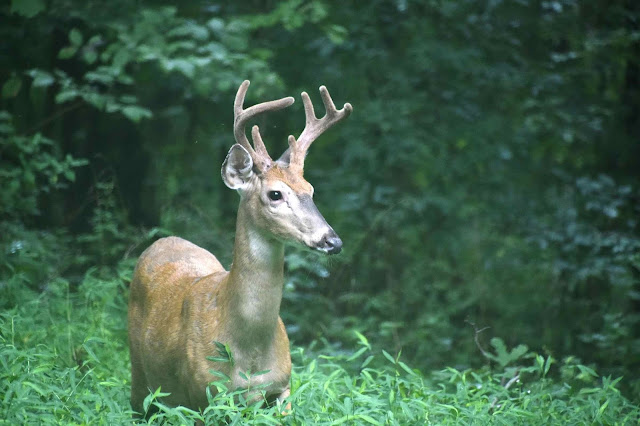 You may ask, why are deer coming to this spot in the woods? Actually, I have a salt block that's just below the foliage. You can't see in the photos. The salt draws the deer in like flies to honey. I use it to bring the deer in so I can take a few photos. Interesting, I have found that small creatures like the salt, too. When inspecting the block, I have noticed tiny scratches on the sides which appeared to come from mice. 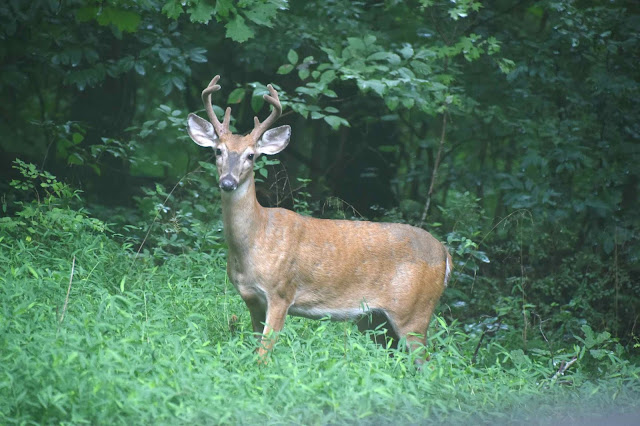 Here's the last photo, however while writing this blog article, I looked back out the window and another buck was standing near the salt box. This new buck is the largest that I have seen near the salt block. I named him Mr. Buck and can't wait to put his photo in a future blog. Stay tuned.....

Leo Lakes Treasured Maps - Check-out my maps! My maps make great gifts for the lake house owner, lake lover, or fisherman. I have over two hundred on my website that can be purchased right from the site, or I can do custom and personalizes lake, river or bay maps, too. Oh yeah, I hide a tiny mermaid in the waters of all my maps that folks love to search for. Find out more interesting facts about my treasured maps by going to LeoMaps.com.

Posted by Baitrageous at 11:05 PM No comments:
Email ThisBlogThis!Share to TwitterShare to FacebookShare to Pinterest

I went on a safari! Well, probably not a safari that you are thinking about with elephants and tigers. I went on a low country "photo safari" in South Carolina, near Hilton Head. It's where a Professional Wildlife Photographer is the guide and tours you around a waterfowl rich area in a boat. I've never done this before, but found it well worth the cost. Not only do you see and take photos of some great wildlife, the guide talks about the waterfowl and assists you with your camera setup to help take the best photos. I added these photos to give you an idea and of course, I had to add a little creativity with the pelican print! 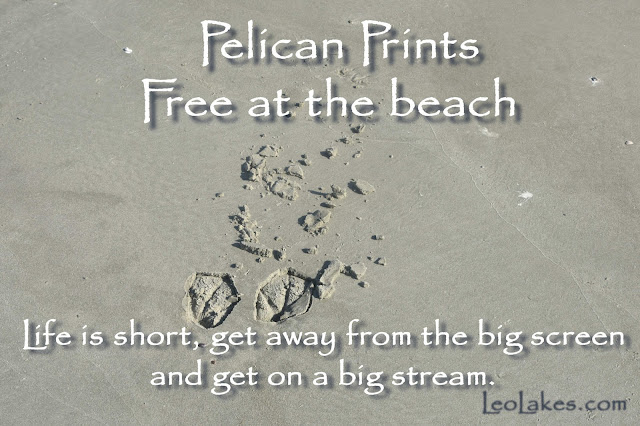 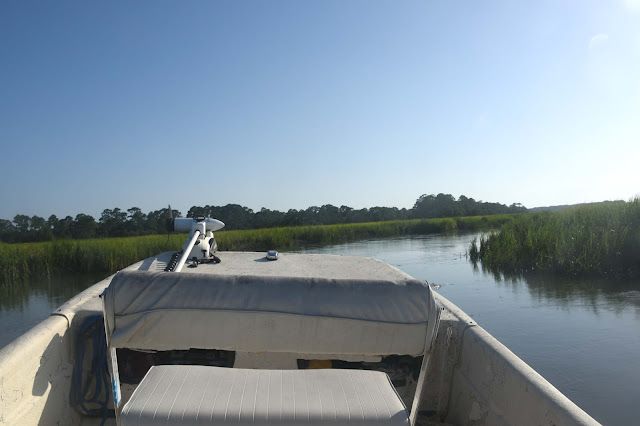 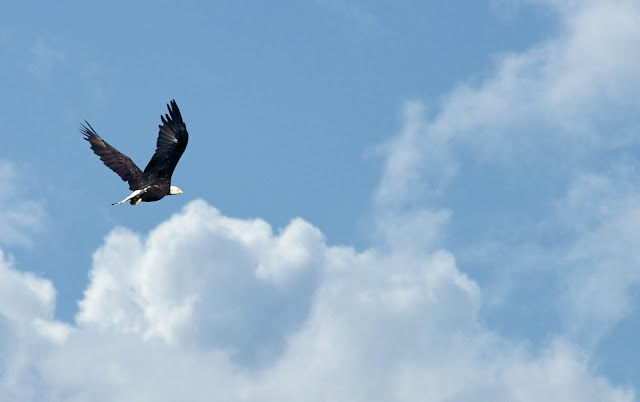 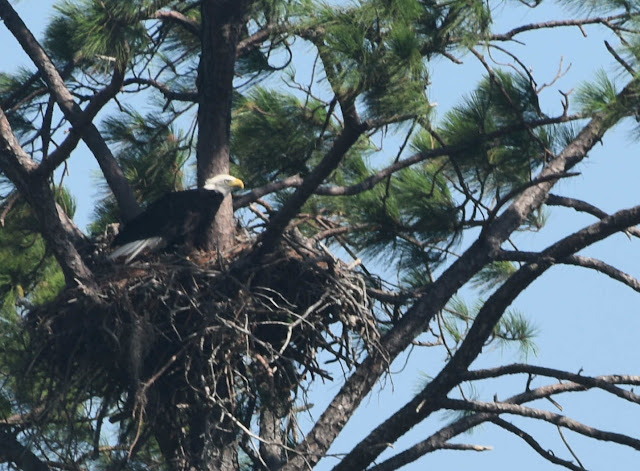 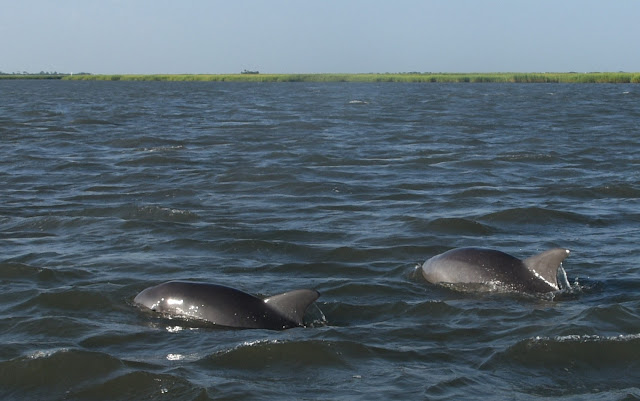 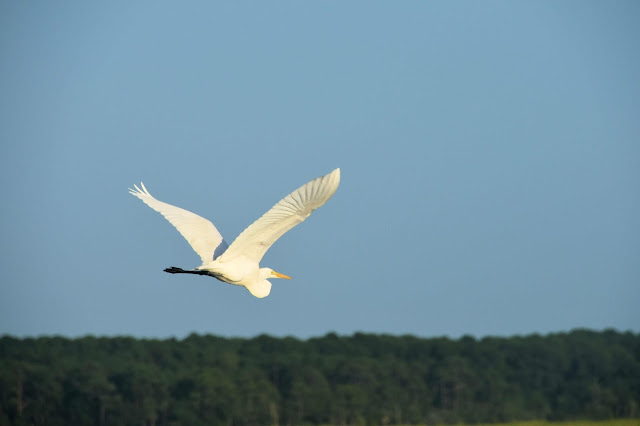 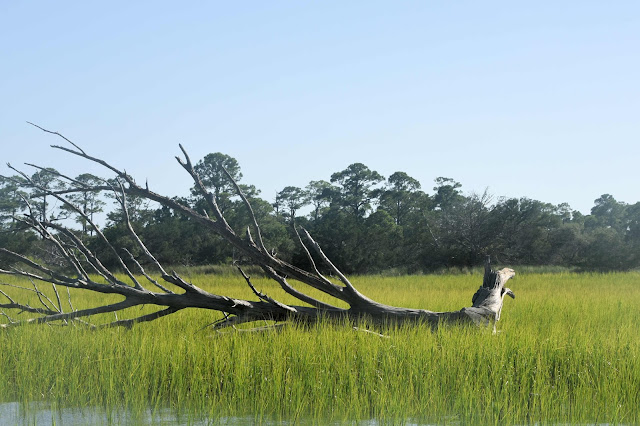 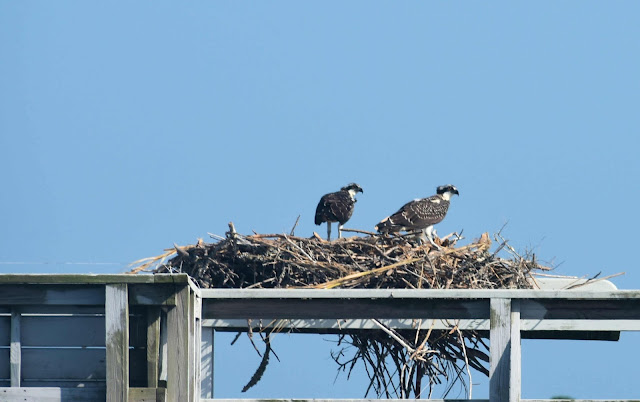 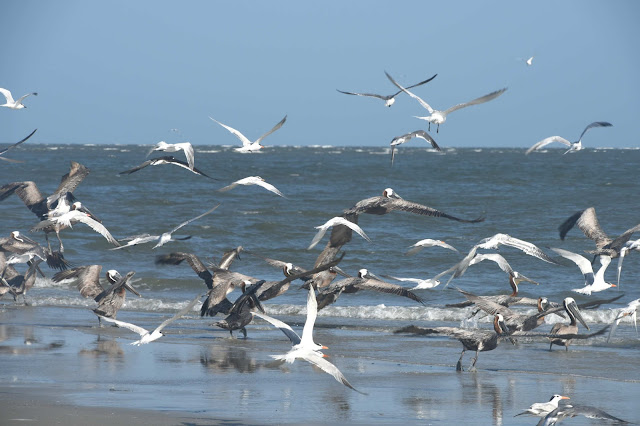 I hope you enjoyed. If anyone is near Hilton Head and is interested in a photo safari, the photographer I used was Eric Horan. I highly recommend a photo safari and Eric Horan!  Oh yeah, here is one of my vintage style maps of Hilton Head that I have on my website, LeoLakes.com, check it out. 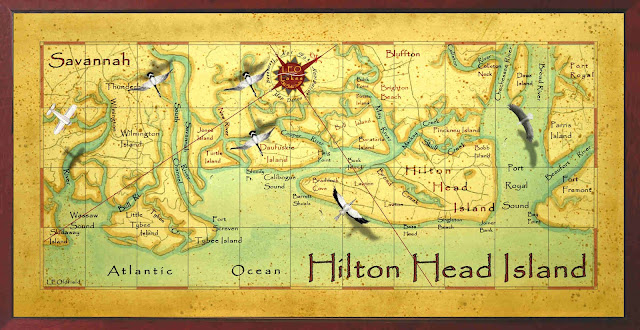