Sunday I awoke to a beautiful foggy morning here in Tennessee. I looked out into the ten acres woods to see what I might see. Normally, we see turkeys wondering around looking for seeds or deer grazing. Today I spotted a hawk perched on a limb in the front yard. I wondered what the hawk may be after. We have a bird feeder that I keep filled in the winter time with sunflower seeds. It seemed that the hawk was watching the feeder. Could it be that he is after a bird? Once I saw a hawk attack a blue jay, so I grabbed my camera to be ready for any action. 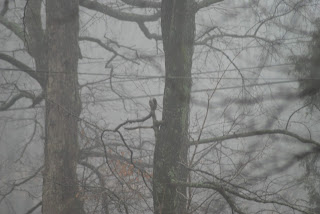 As you can see from this photo, he appears to be a common Red-tail Hawk. 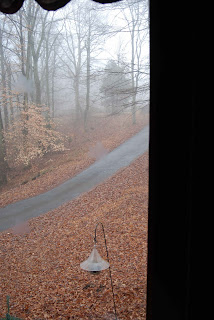 This is a picture of our bird feeder. It doesn't seem that the birds are aware that a hawk is near or maybe they have no fear of a Red-tail. 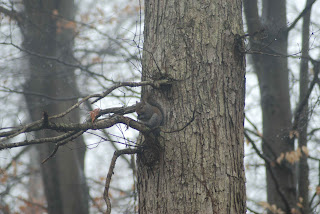 I found what he may be after, I spotted a fat squirrel near the feeder. For an hour and ten minutes, myself, my wife, and teenager watched the hawk and waited for some action. I was in perfect position to capture a wildlife moment, but the hawk wasn't in a hurry. Finally, I decided to sneak-out with my camera to see if I could get a better shot. As I moved closer, I thought what a great photo if I could get a shot of the hawk attacking a fat gray squirrel. I moved closer and closer. 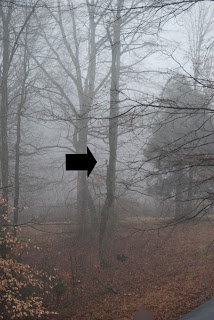 THEN, as I moved closer and the fog lifted a bit, I could see something wasn't right. This picture pretty much sums it up.

Dang, I feel like a dummy. We have been watching a red tail branch. I guess I can blame it on Animal Dyslectic Syndrome (ADS) which you can read about from an earlier post.

What's in your Woods? Get out to find out.

Posted by Baitrageous at 9:00 AM
Email ThisBlogThis!Share to TwitterShare to FacebookShare to Pinterest