Not long ago while sleeping, I heard a voice saying "John Wayne, John Wayne". I looked at the clock and it was 12:38 am. At first, I thought dang I must be dreaming and I'm in the movie Rooster Cogburn. Then reality set in and I considered hearing voices means that I must be going crazy. So like any man I woke my wife and said "do you hear that" and she said "no, go back to sleep you are dreaming." All of a sudden there it was again "John Wayne, John Wayne." I said to my wife "if this is a dream, you're in it too but I don't normally dream about you in a John Wayne movie."
We quickly realized the voice was coming from the outside near our bedroom. The wife believes in ghosts and was obviously thinking she may get to see her second aberration, scary. We both jumped from the bed. I grabbed Dirty Harry. Oh yeah, Dirty Harry is my 38. Being the Head of Security here at the ten acre woods, I was prepared. You won't believe what we found.
We discovered the lady from down the road, in our backyard, dressed in her pink moo moo, looking up at a tree, yelling "John Wayne, John Wayne." I thought What the.... But was happy to find out that I wasn't crazy but this women may be. Dang what a sight.
Apparently, John Wayne is the name of her CAT. She found him in our tree about sixty feet up and was trying to get him down. I thought to myself, I bet Dirty Harry can get that cat down (JUST KIDDING, I WOULD NOT DO THAT. LOVE CATS, WE HAVE FOUR, JUST ADDED FOR HUMOR).

Anyway, after about 15 minutes, John Wayne manned up and took a leap of faith. I guess you could say John Wayne dropped in. Whack, Smack,Thump, John Wayne hit the ground, slowly got up, shook his head and trotted off in true John Wayne fashion. Believe it or not this was a true story!
One thing we have learned after living in the ten acre woods.... you never know who or what may drop by. 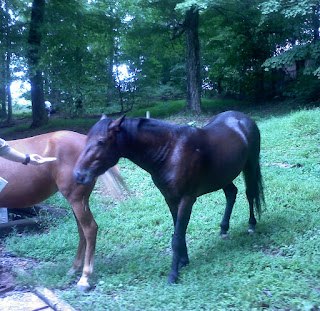 Just wait when you hear about the story of Mr. Ed and his buddy's who dropped by for a patio party.

What's in your woods, river, lake or bay? My woods have John Wayne!
Posted by Baitrageous at 10:49 AM
Email ThisBlogThis!Share to TwitterShare to FacebookShare to Pinterest