A major event occurred the other day in the Ten Acre Woods, Vandalism! It all happened on the night of June 26th after mid-night. On the deck, a multi-layer shelf full of plants and flowers was toppled over. All sorts of plants, ivy, flowers, vases and pots came crashing down. Broken glass and soil was tossed all over the deck; plants were lying out of their containers with roots exposed. In addition, other plants were purposely pull down from there shelf. It looks like animal vandalism has hit the ten acre woods.

WHO COULD HAVE DONE THIS!
An investigation is underway and many animals of interest have already been identified. More evidence was discovered after a search of the site. Graffiti was found along the wall near the crime. The perpetrator left this message. It’s obvious that the graffiti was generated by an amateur.

The message is basically an extortion for food. Here is a picture of the top animal of interest. Note the black mask around the eyes. 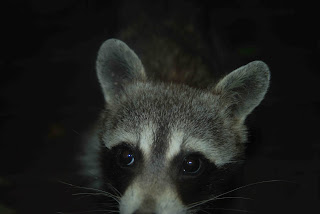 Be on the lookout for this animal of interest and remember, what's in your river, lake, woods, or bay? Get out and find out!

Posted by Baitrageous at 1:36 PM
Email ThisBlogThis!Share to TwitterShare to FacebookShare to Pinterest

I think it was Alvin the chipmunk...he must've run out of wasps ;)

Darn critters! Time for a posse to hunt them down.

Biscuit, Alvin has been seen in the neighborhood along with his two buddies. Our head of security, Tyrone the big cat has a eye out for them.

Mel, a posse has already been formed and will head'm off at the pass. Tyrone, Kibble, Stormy, and Gray are in hot pursuit.