Here's the ugliest Harley Rider you will ever see! 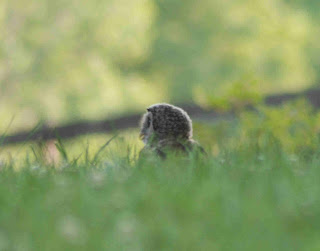 Not really, I came upon a fuzzy headed owl sitting low in some green clover. He appears to be a young Barred Owl (Fuzzy Head) probably just a week out of the nest. I could see that Fuzzy Head wasn't munching on clover; he was just exploring his new world. If you look closely below, you will see one of the parents near, sitting on a fence post in the background. Fuzzy Head's parents keep a close eye on him and continue to feed him. 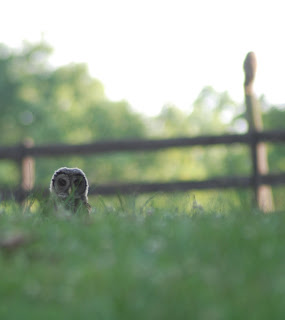 In fact, young Barred Owls may remain near their parents for up to 6 months. When Fuzzy Head grows up. 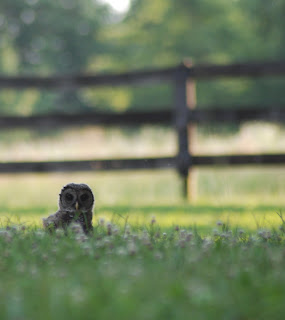 Fuzzy Head was probably born in the nearby tree with up to three brothers or sisters. A few days ago, I did notice that two Owls were in the clover near the tree but didn't have my camera so I moved on. Now I wonder what may have happened to the other young Owl. Their only predator, other than man, is the Great Horned Owl and I have seen several in the area. 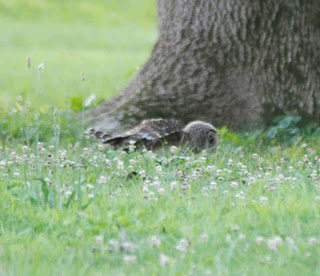 After a while, Fuzzy Head must have gotten nervous with me being near. He leaped to his feet and flew back to safety. 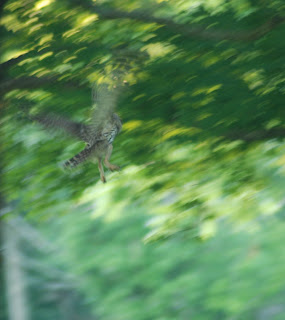 It was obvious that Fuzzy Head hasn't been flying very long because he looks awkward in flight. 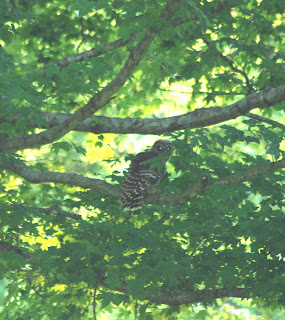 When he landed he quickly swiveled that Fuzzy Head around to peer back at me with those coal black eyes.

Life is short, find out what's in your Lakes, River, Bay, or Woods

Posted by Baitrageous at 7:30 PM
Email ThisBlogThis!Share to TwitterShare to FacebookShare to Pinterest