Battle of the chipmunk and wasp!

About two years ago, I was lucky enough to see a Chipmunk from our front window. I always have my Nikon D80 camera handy for photographing wildlife because we live on ten acres in the woods where many animals come near. I grabbed the camera and quietly headed out of the front door in hopes of getting a few photos of Mr. Chipmunk doing Chipmunk stuff. Little did I know that I just happened to be in the right place at the right time to experience an unusual event and likely one that only a very few have photographed. To begin with, here is Mr. Chipmunk thinking he is sneaking across the walk to enter our planter where there’s moist mulch and flowers and seeds, but I was there with my camera. 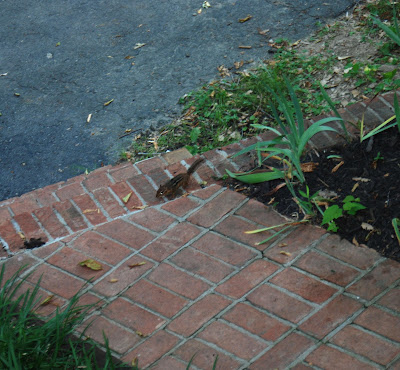 Lucky for me, Mr. Chipmunk was oblivious to my presence and I was able to photograph his every move. He seemed to be on a mission and I wasn't clear on what he was up to. 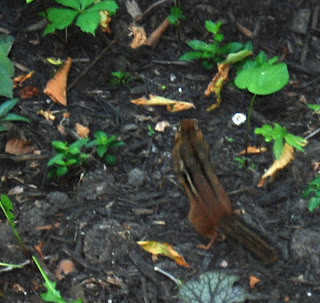 Anyway, I noticed that Mr. Chipmunk kept looking up the brick wall and I wasn't quite sure why, but I did noticed a wasp nest in the corner above the garden hose. It was about 8 ft above the ground and it appeared that was the target of the chipmunks attention as you can see below. 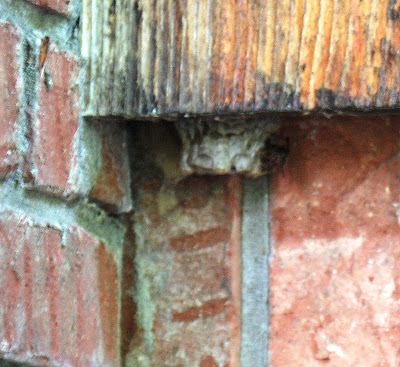 If you look closely, on the right of the nest, you can see a wasp guarding the nest. 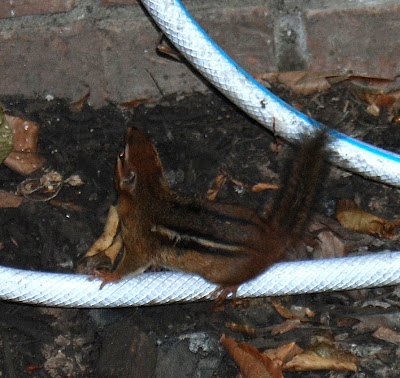 Believe it or not this little Chipmunk may have saved me from a trip to the hospital. You see, I am allergic to bee stings. Actually I’m 1 in 1000; that’s how many people are allergic to bee stings. If I’m stung, 2 Benadryl pills and a trip to the hospital parking lot to sit. I wait until the symptoms disappear; if not, a trip inside for an adrenalin shot. Almost always, Benadryl does the trick for me. If anyone around you gets stung, watch them for any sign of hives, swelling and difficulty breathing. Get immediate medical attention if you suspect someone is having a reaction.  You can become allergic at any time. I wasn't allergic until I was in my early twenties, just be aware. Now back to my story. 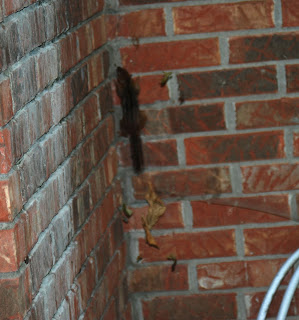 In a flash, Mr. Chipmunk quickly climbed straight up the brick wall and to the nest. The Chipmunk plowed right into the nest, head first and the wasp didn’t have time to react. In fact, so fast I wasn’t able to capture a picture until the Chipmunk started back down. As you can see, Mr. Chipmunk has a wasp in his mouth. It became a quick snack as he headed down and afterwards there was a lot of chatter which either suggests it was delicious or ouch that hurt. Click on the picture for a close up. 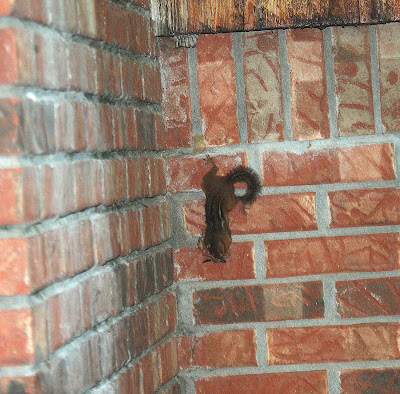 It was pretty amazing, I learned that Chipmunks are experienced wasp tracker and realized that I would have made a terrible Chipmunk because that would have killed me (bee sting). I did a little research on chipmunks after this happened and found that chipmunks love wasp and will attack the nest. I felt lucky to have seen this unique event in nature.

Hey, want to hang something on the wall that's unique, see my art www.LeoLakes.com

Posted by Baitrageous at 7:30 PM
Email ThisBlogThis!Share to TwitterShare to FacebookShare to Pinterest

Thank you for this story! We just saw a wasp get bitten in half by a chipmunk and thought it was so odd. My husband is also allergic to bees and was relieved to have a friend on his side. Great story and it has validated that chipmunks loooove wasps!