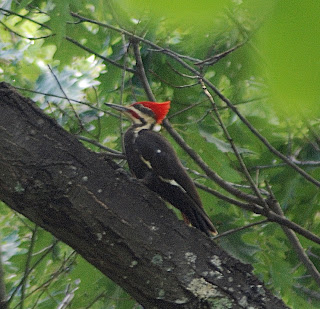 oldfieldstudio.com
A few weeks ago Woody Woodpecker(Pileated Woodpecker) came to visit our home.  Normally, when they see me they fly in the opposite direction, but I tricked him this time and dressed up in a Woodpecker costume. It is Halloween, but I am just kidding. I was lucky to take a nice picture of this Pileated Woodpecker traveling up a tree looking for bugs. You can tell he is a male by the small red strip under his eye, which is missing on females. These birds are fairly large (16” long) and are a bit shy. They are common in the southeast and like mature woods. You will know they are around by the large oval holes in trees and the wuck, wuck calls they make. In spring you may see a pair flying together. Sometimes I have a pair that nests nearby our home. Also, checkout my humor tab above, you will laugh. Comments are always welcome too. Enjoy!
Posted by Baitrageous at 9:14 AM No comments:
Email ThisBlogThis!Share to TwitterShare to FacebookShare to Pinterest

A Walk in the Woods! 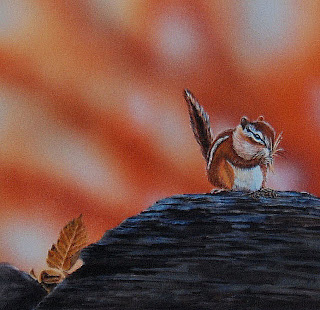 oldfieldstudio.com
Many companies advertise about how good natural products are for the mind, body and soul. If this is true, then the closer you get to nature the better. So, take a walk in the woods and listen to the sounds. It’s free.
Posted by Baitrageous at 11:01 AM No comments:
Email ThisBlogThis!Share to TwitterShare to FacebookShare to Pinterest

A Picture of a Murder of Crows at a Condo! 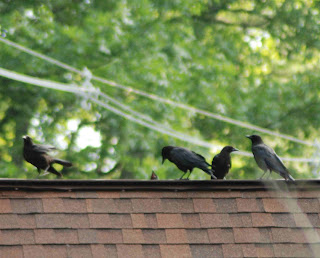 Yep, here is a picture of a murder at a condo in Gatlinburg Tn. You see, a group of crows can be called a murder of crows!
Posted by Baitrageous at 8:49 AM No comments:
Email ThisBlogThis!Share to TwitterShare to FacebookShare to Pinterest

A Black Vulture is at our back door? 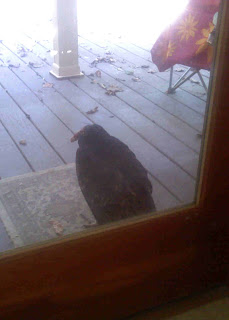 I am not sure why this lone Black Vulture came to our back door. He did not knock, but did stay for a while. Our cats just watched in amazement and I think he must have smelled the cat's food.http://www.oldfieldart.blogspot.com/
Posted by Baitrageous at 7:17 AM No comments:
Email ThisBlogThis!Share to TwitterShare to FacebookShare to Pinterest

A visit from a Tennessee Owl! 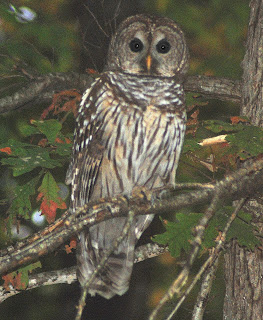 Yesterday, I looked out of the front window and in a tree was an owl looking back at me. It was a Barred Owl and I was lucky to get a nice photo. He was about 20" tall and had cold dark eyes. I checked the bird field guide and Barred Owl's are fairly common in Tennessee. Interestingly its call is "who cooks for you, who cooks for you all.". I think it's a southerner because I heard it call "who cooks for ya'll.
Posted by Baitrageous at 7:51 AM No comments:
Email ThisBlogThis!Share to TwitterShare to FacebookShare to Pinterest 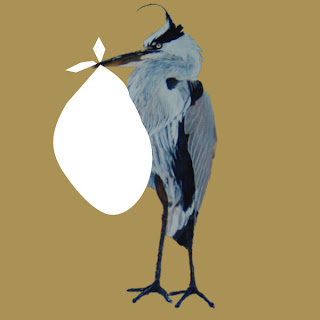 The economy has gotten so bad a Great Blue Heron takes a job as a Stork.
Posted by Baitrageous at 8:04 AM No comments:
Email ThisBlogThis!Share to TwitterShare to FacebookShare to Pinterest


It all started on one fall day when Callie, 4 years old, noticed that her 1 ½ year old sister had a poo diaper. Now Callie had watched her mother change diapers before and decided that she could also change diapers, but better. She quickly and secretly took Sarah to her room, found a new diaper and started the poo change process. As she removed the poo diaper, she apparently discovered that there were no wipes around. Now what do you think a 4 year old will do in this situation? Very simple, find the nearest object around and start wiping. After Callie completed the good deed, a new problem surfaced: What to do with the evidence? There's a very obvious solution, toss everything under the bed and no one will ever know. The next day a bad, bad, bad smell came from Callie's room. Karen my wife and their mother, made a complete search of Callie's room to determine where the smell was coming from. Finally the discovery, it appears that pooh bear was used to clean up Sarah and was tossed under the bed. Now that's how a woman found bear pooh under the bed!
Posted by Baitrageous at 10:34 AM No comments:
Email ThisBlogThis!Share to TwitterShare to FacebookShare to Pinterest 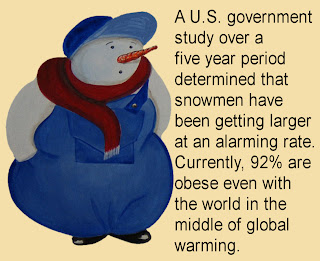