NEWS FLASH- It’s hard to believe that scientist have discovered a new species of elephants. The newly discovered elephant will be called elephas chamaeleonidae or Chameleon Elephant. This elephant has the ability to almost disappear into its environment. The lead scientist on this discovery indicated that the Chameleon Elephants have been around for a long time, “we just could not see them because of their chameleon ability.” Also, it’s unlikely you will see them in a zoo because of this ability. By sheer luck a picture was taken of about a dozen, if you look closely you can make out their bodies, some are in different stages of chameleonism. This is the only proof that they exist. However, skeptics question the validity of this discovery with three words, where’s the poop? 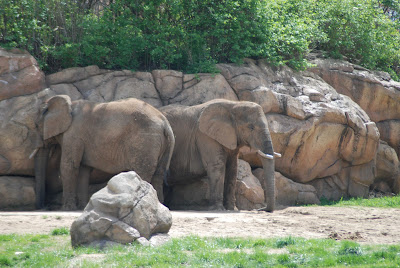 The lead scientist did make this comment: "I believe I have stepped in Chameleon Elephant poop! I don’t think you can see it, but you can surely smell it. So, if you ever smell a bad odor and can’t find it, then you have stepped in it too! Now that's the poop, I mean proof."
Posted by Baitrageous at 8:59 AM
Email ThisBlogThis!Share to TwitterShare to FacebookShare to Pinterest