When the first human, “Ug” entered the water he probably figured out that he could float on logs to sneak up on prey, catch fish or just have fun. The obvious next step was to propel and maneuver the log. "Ug" picked up a stick and used it as a way to propel and guide the log. The other members of the tribe must have been awed by this brilliance. The stick became the choice in which the tribe traveled the water ways. Unknowing to "Ug", this was a major breakthrough in watercraft propulsion.

Sometime later, "Ug" began to understand that the shape of the stick made a big difference in how well the log could be guided and propelled. The paddle was born. The paddle could be used to go up stream and into deeper water. Ug’s life was better, much better except when "Ug" was up a creek without his paddle.

After many, many years the outboard motor was born. To a very small degree, we all have Ug to thank for today’s outboard motor. I have a couple of antique outboards. One such motor is this 1946 Western Auto Wizard. It is model number WD-3 and is a neck snapping 3.2 hp. Before the war, the outboard motor wasn't too successful, however after the war the motor became as hot as an Ipad, well almost. 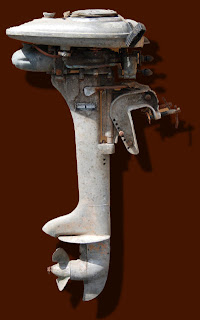 Carl Kiekhaefer produced this outboard and later he became the founder of Mercury. The motor is not worth much, but I was thinking that maybe I can make it into a coffee table. Do you think it's too "Ug"ly?


Hope you enjoyed! Remember: What's in your woods, river or lake? You have to get out to find out.
Posted by Baitrageous at 6:29 AM
Email ThisBlogThis!Share to TwitterShare to FacebookShare to Pinterest