The other day the wife and I were headed out and my wife noticed that an unusual creature was attached to the side of my SUV. After a closer inspection by the chief bug inspector and that would be me, I discovered it was a Praying Mantis with a Stick Bug attached to its back. I thought, how odd. Why would a Stick Bug mess with a fierce Praying Mantis? The Praying Mantis is a major predator of the insect world and will even try to capture Hummingbirds. I guess the Stick Bug must have told his buddy’s--“Hey y’all watch this.” 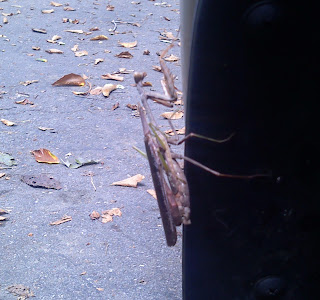 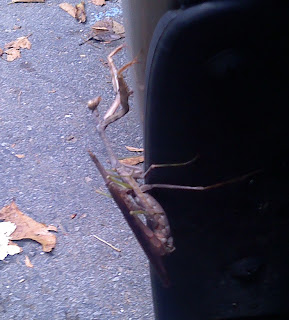 Now what does this have to do with marital bliss? Well, I was so intrigued by this occurrence that I had to do some research and WHAT I FOUND WAS DISTURBING. Unfortunately, the Stick Bug is not a Stick Bug at all. It’s a male Praying Mantis. Now men, the next sentence is unsetting and you may prefer not to read. My research on the net indicates that the Female Praying Mantis will often eat the head off the Male Praying Mantis during or after mating. Wow, what a honeymoon. Could this be the same as the smoke after? Talk about a dead beat dad. 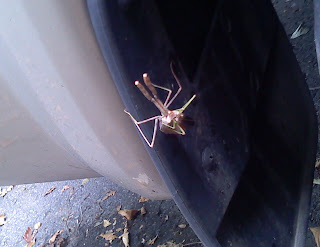 Scientist are not sure why this happens and what the advantages are for this insect. But dang, I’m glad that I am not a male Praying Mantis, one and done! Thoughts?


Find out what’s in your woods, river, lake, or bay. Get away from the big screen and get on a big stream!

Posted by Baitrageous at 9:53 AM
Email ThisBlogThis!Share to TwitterShare to FacebookShare to Pinterest

Actually, scientists who get research grants to study such things let the happy mantis couples make XXX-rated videos of themselves, and it was determined that male only gets munched on about 30% of the time. Pretty good odds, except that after a couple of matings they're vanishingly small! (The odds, and maybe the males too.)

Seems like starved females that eat the male before, during or after copulation lay bigger egg cases than those who chastely don't, and have more viable offspring. Scientists call this "males investment in their offspring," which is sort of unusual in the animal kingdom. Most guys just f**k and run, but not Daddy Mantis, no sir! He's riding her till the bitter end, for the good of their kids!

Very interesting, I would not want to be a male mantis. Females rule and males.....Hmmm

Think of it as paying a lifetime of child support in one big bite!