DO YOU HAVE ANIMAL DYSLEXIA? RESULTS ARE IN!

Do you rarely see animals in the woods? Then you just may be suffering from ADC (Animal Dyslexia Condition). What is ADC? Its the unfortunate inability to see animals in their natural habitat. You have probably heard of humans having dyslexia, which is the difficulty in seeing some letters while reading.  This is similar, but it's the difficulty in seeing animals in their natural habitat. As you probably know, most animals are camouflaged so to almost disappear into the woods, however most folks can still pick out the animal.  Have you ever looked directly at an animal and never seen it? If this is the case, then you too may have ADC. Take the test!
TEST INSTRUCTIONS: Look at photo below for about one minute to find the animal. You may write in the comment area what you see. Later this week I will publish the correct animal. 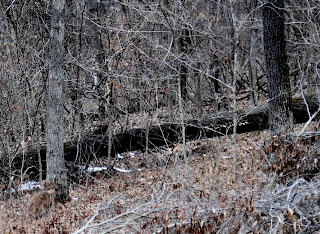 Remember: What's in your woods? You may never know if you have Animal Dyslexia!
ANIMAL DYSLEXIA RESULTS !
The results of the test for animal dyslexia are in. It seems that folks saw a cat, a squirrel, an owl, a monkey or a coyote. The real hidden animal is a coyote as shown in the photo below. If you didn’t see the coyote, then you may have ADC. There is no cure, however it can be improved. If you visit the zoo four times a year and view animals in their natural habitat it will improve over time. Remember there's nothing to be ashamed of and Good Luck! 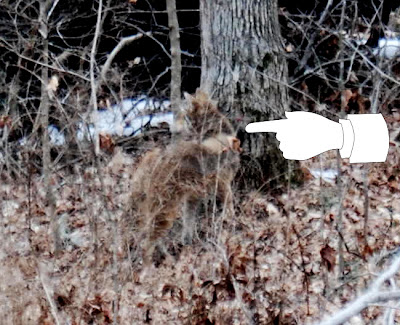 Posted by Baitrageous at 7:18 PM
Email ThisBlogThis!Share to TwitterShare to FacebookShare to Pinterest