Georgia on my mind!

Hey, I just returned from an action packed trip to Atlanta with the family (wife and the two teens). I had two destinations on my agenda, the Georgia Aquarium to see fish and the Orvis Store. On a side note, our eighteen year old will be headed to college soon (The University of the South: Sewanee) so this may be our truly last family trip. The good news, Sewanee owns 13,000 acres of nature so she won’t miss The Ten Acre Woods.


We drove down from Nashville and it was a nice drive, except that my new GPS turned out to be a dumb dumb if you know what I mean. Luckily, I have multiple GPS’s and I switched over to the old faithful Garmin. I like using a GPS on trips. Do you know how husbands and wives argue about directions in a car, well that all stopped when we purchased our first GPS.  Now we both argue with the GPS, its teamwork! I must admit, it’s really funny when she argues with it and it quietly tells her where to go--- Take the next right to Hale Street, Hee Hee, I’m in trouble now! 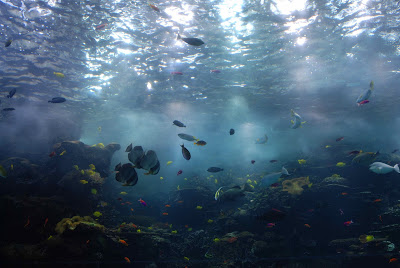 First on the agenda was the Georgia Aquarium. I know, for the outdoor enthusiasts seeing fish in a tank is not an adventure, but this was big fish in a big tank. Heck, I once fished in an aquarium and caught a goldfish when I was six. It turned out to be my aquarium’s record catch for goldfish. The Georgia Aquarium is no kid aquarium, its gimongus. In this aquarium there were thousands of fish and the best thing is the clear tube that you walk through under the largest tank. We saw sharks, grouper, and two whale sharks that were as big as a school bus. I couldn’t believe it, but we didn’t see a Georgia Bass, dang! 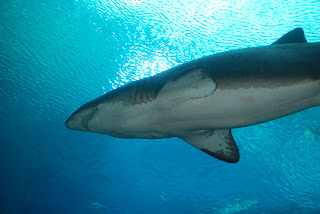 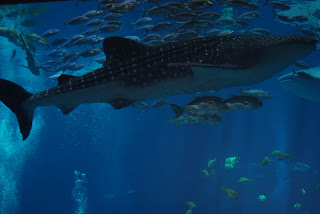 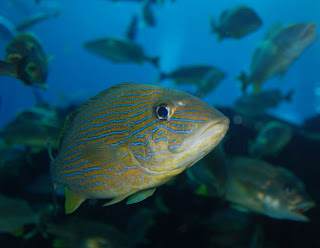 The Georgia Aquarium was great! Also, I have been to the Chattanooga Aquarium and it’s also a must see.


Next up, was the Orvis store (a premier outdoor store for you indoor types). This is my first visit to Orvis and you won’t believe it! In the parking lot they have parking spaces labeled.........? Stay tuned for part 2 of this post in the future. Remember: What’s in Your woods, river, lake or bay? Get outside!

Posted by Baitrageous at 3:36 PM
Email ThisBlogThis!Share to TwitterShare to FacebookShare to Pinterest

Looking forward to the rest of the story! You have to admit the ol' heart gets to thumpin' when you see a big fish no matter where it is.

Larry,
I'm a zoo and aquarium aficionado. I've worked at three zoos and have visited a whole bunch. I've been to the TN Aquarium in Chattanooga numerous times and in some ways I like it a whole lot better than the GA Aquarium... it's more my style... especially because of the freshwater focus. It is hard to deny how awesome the GA Aquarium is- the only place to see Whale Sharks on this continent and one of the few in the world. That tank boasts the largest viewing window of any aquarium in North America too. It's one of the largest aquariums in the world.
When you first walk in to that viewing room and see those Whale Sharks appear before your eyes, all you can say is "Wow!" I was equally impressed to see that the tank is big enough that they disappear into the blue as they make their rounds.
Looking forward to part 2.

Thanks, Mel. You're right every time I see a big fish I think man, wish that was on my line.

Jay, I like saltwater fish, but freshwater fish are my thing. I guess this is why I liked the Chattanooga Aquarium and it appeared to be laid out better. It was amazing seeing the Whale Sharks that was as big as a bus.

Woah! Look how big those whales are! That looks so scary! While all jellyfish look so pretty, they even look prettier at night 'cause they glow in the dark! I've never been to anywhere in Atlanta, but if this aquarium is the biggest in the world, then I guess I should bring my kids here one of these days. I hope you enjoyed your trip! :)