Early this morning, I walked eagerly into the woods in hopes of finding that a fox had come across critter cam, my motion detection camera. Hmmmm, looks like something has been walking around near the camera, but it’s too hard to tell what. I quickly took the digital card out of the camera and headed to the house. At home, I loaded the card into the computer and there it was. Can you see it? If you can’t, then you may have Animal Dyslexia (Go to post called "Do You Have Animal Dyslexia? to find out). Look closely! 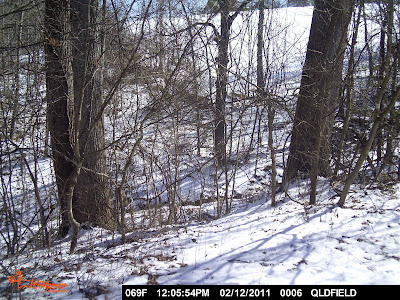 It’s a dang Squirrel, a Squirrel. No Red Fox! The $5.99 Fox pee I sprayed around isn’t working. Can you believe I paid money for pee. Who does that. Anyway, I will leave it out a few more days because I want to get my money's worth for this pee. (The Squirrel is in the left, lower part of the photo near the big tree for those who have Animal Dyslexia.)
Posted by Baitrageous at 9:58 AM
Email ThisBlogThis!Share to TwitterShare to FacebookShare to Pinterest